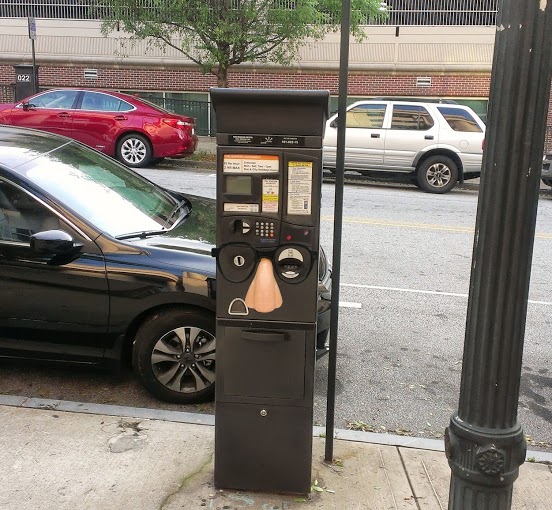 My other cousin is a slot machine in Biloxi.

The only thing more inconvenient than Atlanta traffic is Atlanta Traffic Court.

Our city’s backwards legal system makes sure of that.

This morning my wife and I spent four hours downtown resolving two tickets she received in March: failure to carry proof of insurance and obstructing an intersection.

We would’ve gladly paid the fine weeks ago if the traffic laws did not require an appearance before a judge.

I went to provide moral support, give uninformed legal advice and to act as an observer of our city’s legal system.

Here are a few of my observations:

1) The best way to avoid the hassles of Traffic Court in Atlanta is having money.

People who have money pay for lawyers. The judge and the lawyers were the only people smiling in the courtroom. The lawyers enter first and then leave first.

I estimated the average length of an attorney’s stay at the courthouse to be around five seconds, 10 seconds if they couldn’t find a place to park.

Traffic Court attorneys resolve their clients’ cases by muttering a few words to court personnel, discussing the most recent Atlanta Braves game, and then leaving to play golf.

2) Being poor sucks, but it really sucks if you’re in Traffic Court.

One woman had flown to Georgia from another state for her mandatory court appearance, only to be told she would have to reschedule.

Another man waiting with us said he had begged to delay his court date because he was having major surgery the next day. The court personnel told him that they couldn’t reschedule, even though they don’t hesitate to reschedule appearance dates for people who already had waited hours.

People with financial hardship can enter into an installment plan to pay off their tickets – for a small fee tacked on to each payment, that is.

3) The parking meters would confuse Batman.

They’re big, have a bewildering array of buttons and deliver a small electric shock if you make a mistake. The meter we used was actually R2D2’s jerk cousin, Vinnie.

We began our morning by watching a man fumble a dollar bill while he waited for Vinnie to do a Google search in order to verify that George Washington was a U.S. President. After a few more awkward attempts at giving Vinnie money, it was our turn. Every time we erred, Vinnie would shock us, call our mothers fat, and whiz on our shoes.

When we finally succeeded, Vinnie said, “Good job, ya moron.”

I gave Vinnie eight of my dollars. I also owe him a kidney.

Every ticket the prosecutor presented was settled for $130, plus costs, which brought the total to around $200. They can’t make it exactly $200, because I guess they like us and they know we need that extra $9 to pay Vinnie.

I saw one hapless guy try to bargain with the judge to reduce his fine in exchange for performing community service. The defendant said he was a recent college graduate and an aspiring entrepreneur.

The judge told him no, then wished him luck on his entrepreneurship.

5) This whole process was unnecessary.

During our time at court we shared the docket with hit and run offenders, people in jail and the other folks like us that won the misery lottery.

Many of us would’ve gladly paid our fines months ago, even paid extra, to avoid a trip downtown. Most of the offenses we saw involved no other drivers. What does the city get out of this process?

The courtroom was so crowded that the bailiff couldn’t seat everyone. Wouldn’t it be much more efficient to allow us to pay these fines online or via mail? Think that might free up some seats? Wouldn’t the city have a much higher rate of compliance this way?

Is it that hard to give the city of Atlanta money?