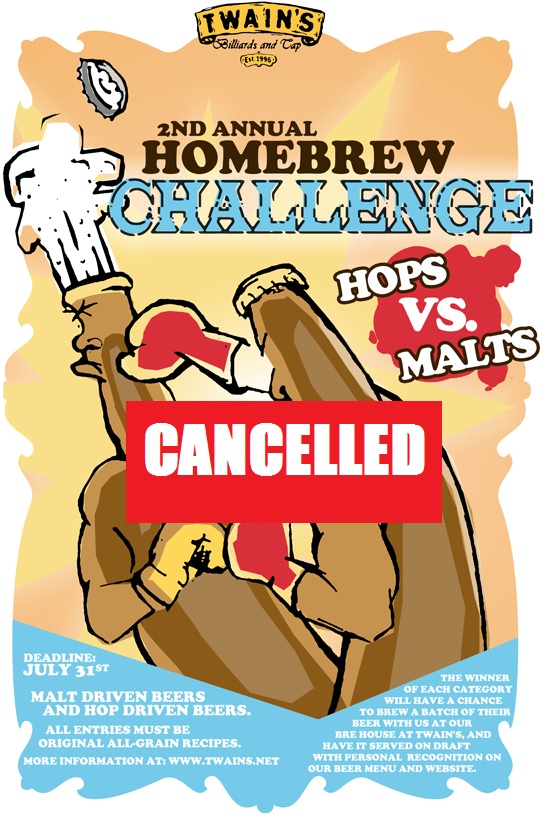 Twain’s home brew event was no match for the fearsome punch of the Department of Revenue.

Changes to Georgia’s home brewing laws are forcing the owners of Twain’s in Decatur to scrap their “2nd Annual Homebrew Challenge.”

House Bill 99, which went into effect July 1, increases the amount of beer home brewers can produce from 50 gallons a year to 100 gallons.

But another provision of the bill concerning transportation of home brewed beer appears to have gotten in the way of the Twain’s event.

“Today, we were visited by an agent from the Department of Revenue Tobacco and Alcohol Division,” Medlin wrote to the group. “We were told that the unlawful transportation of homebrewed beer would not be allowed, and that we must cancel the competition. At this time, we are suspending the event. The effective date of HB 99 is July 1, and we hope to resolve the issue after said date with state permits and move forward with the competition. We’ll keep you posted as things progress. We are looking into the avenues of permitting and it seems that not only will we need a permit for the competition/event, but also the homebrewers who are entering and transporting their beer.”

Twain’s also posted about the cancelled event on its Facebook page, drawing a response from the bill’s sponsor, state Rep. Jason Spencer, R-Woodbine.

“Also, what is key in the legislation is that the local governments HAVE to allow the events to occur by passing either an ordinance or a resolution to permit these types of competitions. You as activist for the competitions need to engage your local city councils or county commissioners.”

As an aside, props to Rep. Spencer for jumping into the discussion on the Twain’s page and trying to help residents understand the new law.

I checked city of Decatur’s ordinances and could find nothing relating to home brew competitions, although I’m not a lawyer and may have overlooked something. If there is any specific law pertaining to this, please let me know. I will email City Attorney Bryan Downs to see if such a law is on the books.

What’s frustrating for Twain’s and other home brewers is that the old law apparently was lax enough that the first event went off without a hitch. Was HB 99 a solution in search of a problem?

On the Coverthops group page, user Planet_Scott wrote, “My feeling when the HB 99 legislation first came up, the language was very ambiguous with no concrete parameters established for events. I felt back then, it was best to let sleeping dogs lay until the wording could be improved…..At the very least, established concrete guidelines for events and competitions. There was no other discussion other than a few emails on the beer talk list.

“As I stated last night, my concern over HB 99 would be the sudden interest by the state to enforce a new law. Before this legislation, we were pretty much unfettered by the existing laws. Now……Well, you saw what happened.”

Rep. Spencer seems to confirm this on his own Facebook page, saying that until now these events have been held “under the radar.” Looks like the Decatur City Commission will have to either clarify the existing rules or adopt a new ordinance for events like this to continue in the city.

To get in touch with your city officials, click here.