Anthony Stokes, a 15-year-old living in Atlanta, needs a heart transplant but can’t get on the list to receive one, according to WSB. Children’s Healthcare of Atlanta at Egleston said the teenager has a history of “noncompliance.”

The Chicago Tribune has already carried a Reuters story on Stokes’ plight. Hopefully more will follow.

In response to an article I published over the weekend, one of my readers directed me to this article in The Economist about the mystery of falling crime rates in the western world. No one seems to have an explanation, but it certainly fits with the trend we’ve seen locally.

Decatur City Schools is considering paying a consultant $8,000 to study school lunches, according to Decatur Patch. Maybe the Board of Education should just show up for lunch one day and try the food. Or use the money to feed kids. Whatever, school lunch funding is ridiculous. All kids should eat for free. Period. I’d rather pay for that than give $8,000 to some consultant who apparently has never done this before.

Walmart opponents are getting their day in court, according to WABE. The proposed Walmart is technically in DeKalb County but is close enough to Decatur that it has stirred up a coordinated and dedicated opposition.

If somebody’s interested in something, there’s probably a group for it. My wife and I saw this bumper sticker the other day on a car parked on Church Street. 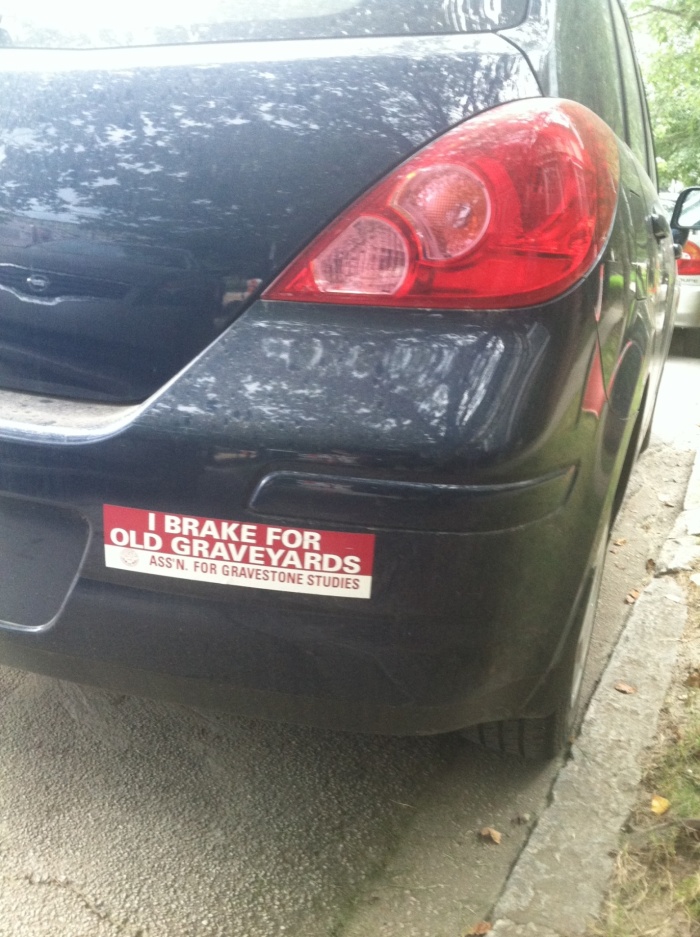 Yes the Association for Gravestone Studies actually exists. I love history, and God bless preservationists. If it weren’t for them there would be so much history wiped off the face of the earth. That being said, I imagine it isn’t too hard to study a gravestone. They don’t really go anywhere.

Also, if I’m ever in a situation where I have to brake for an old graveyard, somebody at the Department of Transportation is going to have a lot explaining to do.