It’s like comparing people, really. No two people are totally alike. The same is true with cities.

In my previous article, I talked about crime trends in the city where I currently reside, Decatur, Ga. I used data provided by the city and the FBI to put the recent so-called “crime wave” in perspective.

Comparing a town with itself is one thing. I felt that in order to truly get a sense of how we’re doing, I needed a measuring stick.

I asked Sgt. Jennifer Ross, spokeswoman for the Decatur Police, what city might make for a good comparison.

“Chamblee and Doraville are closer to us in size but half of our population,” Ross said. “Dunwoody is three times our size and a little over double the population. Roswell, Sandy Springs and Johns Creek are all way larger and more populated. Lithonia, Pine Lake and Stone Mountain are all way smaller and less populated. There really is nothing out there quite like Decatur.”

She’s got a point. Finding a city that comes close to matching Decatur’s demographic profile was challenging. I couldn’t find one in Georgia. I had to look beyond our borders, but not too far. I wanted a Southern city because I think cultural values have a lot to do with how we perceive and react to crime.

I found cities that came close but were still too short, either because of education, racial makeup or economics. The place I found that came the closest was a town I’d never heard of: Carrboro, N.C.

Here’s a comparison of the demographics of each (please note, I’m doing this crap in Microsoft Paint so you may have to click on this image to get a better look at the numbers):

We’re looking at a town that has a similar racial makeup and education level. The population density is also comparable, though Carrboro is a little less compact than Decatur.

In addition to the things I’ve listed here, I think it’s also important to consider that both communities are near an international airport, though there aren’t many that approach the size of Atlanta’s. In addition to being denser, Decatur also has public rail transit, something Carrboro lacks.

As Ross pointed out, there’s nothing out there quite like Decatur. But Carrboro, N.C. comes close enough that I think its crime rate is worth studying. It may give us a better insight into our own.

I’m more focused on violent crime because, well, it involves people getting hurt. Property can be replaced, but people can’t.

So how do these two communities compare in terms of violent crime?

As you can see, Decatur hasn’t seen as many reports of violent crime as our comparison city. Some years we’re running even, but Decatur’s rate hasn’t surpassed Carrboro’s violent crime rate since the late 90s. Good news there.

Now property crime is a bit of a different story. 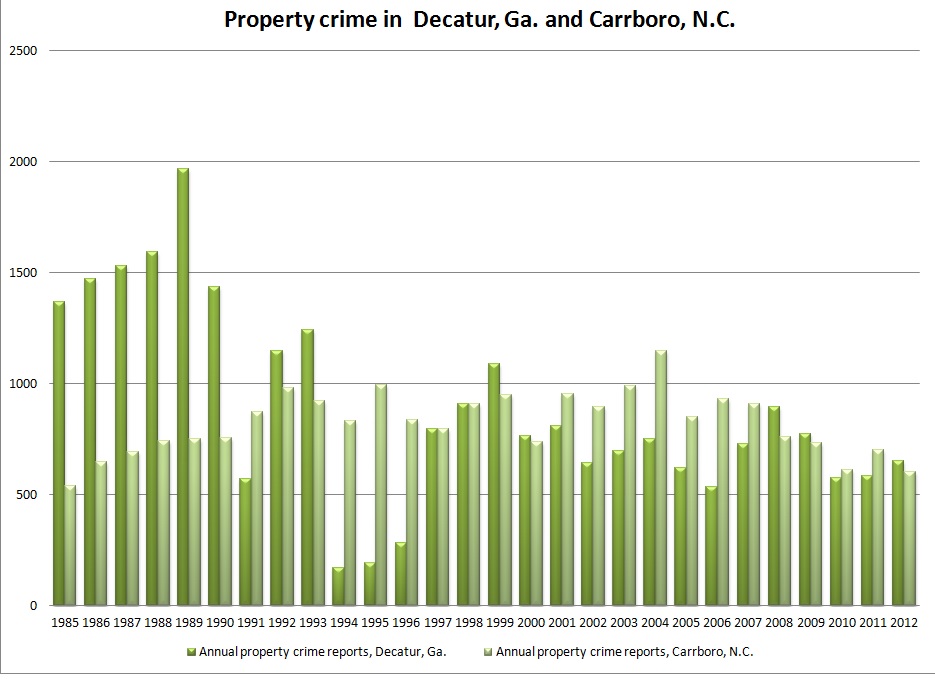 In 2012, Decatur’s rate of property crime surpassed Carrboro’s for the first time since 2009. We won’t know if that trend is getting worse until well after 2013 concludes. It isn’t something to take lightly, given our recent troubles with burglaries in the city.

Editor’s note: As I noted in the prior article, Decatur’s Uniform Crime Reports for the years of 1991 and 1994-96 appear to be incomplete. I suspect if we had all the data, the trends of the two cities would be similar.

This exercise is not unlike staring at ourselves in a fun house mirror. The data provide an interesting counterpoint, but I think the differences are more interesting than the similarities.

The prosperity of the two cities is vastly different. We have a lower poverty rate, a higher home ownership rate and a higher household median income. My gut sense of it, without any deeper analysis of the trends, is that crime rates and economic opportunities – I mean real opportunities, not minimum wage gigs – are inextricably linked.

I think our poverty and home ownership rates should be as closely monitored as our crime rates. I’d argue the best way to fight crime, in addition to making sure our police force is appropriately staffed, is making sure the city’s leadership is focused on expanding economic opportunity for the people living here.

How we do that is a topic for a future post.

But here’s a question I think we should all be asking ourselves as a community: Assuming I’m correct about the effects of poverty and home ownership on local crime rates, are mixed-use apartment projects the best thing for Decatur’s future?

I’m not saying an apartment project definitely will increase the local crime rate. I’m just asking a question based on an assumption that may or may not be backed up by the data. (The point of these posts, in fact, was to use data to challenge prevailing assumptions about crime.) If done correctly, an apartment project could be a boost to the local economy. Most of the proposed apartment projects in metro Atlanta are geared toward affluent young professionals.

Are people who will only be here for a short time going to feel like they have as much of a stake in the city’s future? Will apartments grow the city’s tax base over time?

It’s something to think about.

UPDATE: I’ve gotten some great feedback from friends about why Carrboro might not be a good comparison city, for a host of reasons: proximity to a major city (as Decatur is to Atlanta), demographic makeup, etc. I’m open to suggestions here and willing to run the numbers for other cities as well. I don’t want to pretend that I think this is the perfect comparison. In fact, having a couple of more cities to compare wouldn’t hurt. I just couldn’t find anything that I felt fit the bill as well as Carrboro did.

One reason I picked Carrboro was the size of its police department. I felt that with a comparable size you’d have a comparable command structure that could support the larger force. I think larger cities, while providing a a better demographic match up, might not stack up as well because they’re being supported by a larger police force.

As I said, I’m willing to take suggestions. I’d prefer to stick with cities in the South for reasons I cited earlier. Thank you!