A small patch of brightly-colored signs have sprung up in front of Scott Boulevard Baptist Church. The church sits on the same busy corner as the Selig Enterprises-owned property slated for a Walmart.

Protest and legal wrangling have tied up the controversial project for two years.

Scott Blvd Baptist is under contract to sell their property to Fuqua Developments. Fuqua plans to raze the aging church and replace it with a commercial-residential complex topping out at 5 stories.

Decaturish.com contributor Joe Avary spent Sunday morning with the parishoners of Scott Blvd Baptist Church, who are facing an uncertain future with the sale of their spiritual home.

Inside the cavernous 1950’s-era sanctuary of Scott Blvd Baptist, a pipe organ belted out hymns of joy. The voices of two dozen congregants united in song, though the din of traffic could be heard faintly underneath. The pews sat mostly empty as Pastor Greg Smith described in sermon a struggle akin to drowning.

“When you’re underwater and you can’t breathe your mind gets focused on one thing, it’s how do I get the air that’s out there into my lungs.”

Citing the church’s dwindling numbers, advancing age, and declining health, Pastor Smith told Decaturish.com the church could no longer maintain the property. He maintained that the church exhausted every avenue before entering into contract with Fuqua, exploring partnerships with several organizations without success.

William Parker has been coming to Scott Boulevard Baptist for more than a half-century. He remembers well the church’s heyday, but told Decaturish.com it’s time for the church to evolve.

“You have to change with the times,” said Parker, “I just look at it as one door closing and another door opening. If you don’t change you get stale and die.”

Parker and Pastor Smith both agree the Fuqua deal is the only way the church will survive to continue their mission in the community.

“By selling the building we’ll have money to do God’s work,” said Parker.

“The ministry of god is not bricks and mortar but the lives of people,” explained Pastor Smith, “We may not have the people to do it but we will have the resources to enable [God’s work in the community].” 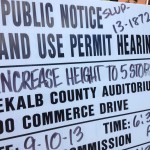 This sign advertises upcoming rezoning and land use permit meetings 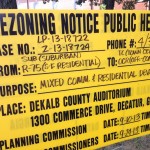 Debra Robinson of Blackmon Road, just behind Scott Blvd Baptist, told Decaturish.com that neighbors are sympathetic to the church’s struggles and there are no negative tensions between neighbors and parishoners. She said the proposed Fuqua development would make a major impact on quality of life in the neighborhood.

Other residents of Blackmon Drive are worried the Fuqua-planned mixed-use development will destroy their neighborhood, according to a press release from Good Growth Dekalb. The same press release says the Community Council voted unanimously to defer two rezoning requests and deny a third at it’s August 20th meeting.

“Fuqua altered its plans at the last moment apparently in response to significant community opposition,” said the  release from Good Growth Dekalb, but the signs in front of the church suggest otherwise. A special land-use permit is being sought to allow Fuqua a variance for a 5-story building.

Here is what’s available on Fuqua’s website about the Decatur Crossing project.

Apparently, the Community Council’s votes are without teeth. They operate in an advisory capacity to the Planning Commission, who meet Tuesday. The Board of Commissioners – the ones who hold the actual power to make decisions – meet on September 24th.