The state of Georgia has deemed me competent enough to teach high school English.

And nobody thought I could do it.

All you frowny-faced naysayers told me a career in secondary education was a dream. Quit reaching for the stars, you said. Only people with handsome and wealthy parents can enjoy such a privilege, you said. Have you ever considered a career in acting, you suggested. 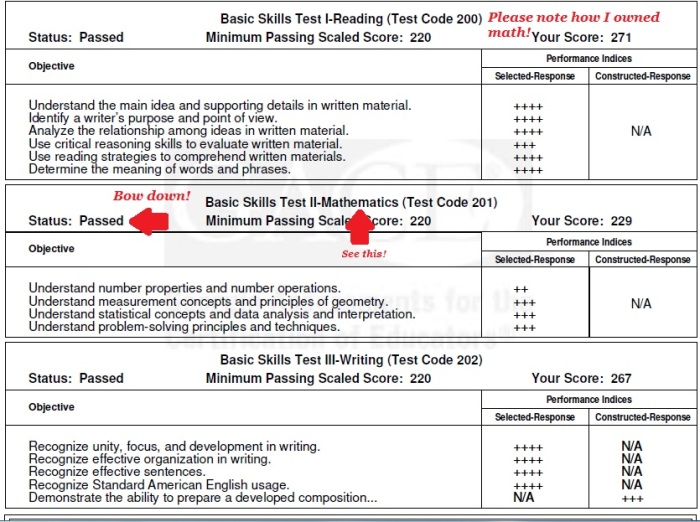 As you can clearly see, I am a master of knowledge who is capable of educating modern students using Jedi mind tricks and YouTube. I’d like to dedicate the math portion of the test to my mom, who spent countless hours restraining herself from smacking me cross-eyed as she tried to tutor me. See mom? Some of that information seeped in after all.

As for the rest of the test, I’d like to thank the following people for my accomplishment:

George W. Bush – for reminding me that no child should be left behind.

Barack Obama – for realizing on the way to the White House that some kids got left behind and asking Congress if they could get them on their way home from work.

Congress – for not actually working and blaming it on socialism.

Jesus – for listening to the desperate prayers of a man trying to remember how to add fractions.

Daft Punk – for no particular reason, not that it’s necessary.

The economy – for driving millions of marginally qualified professionals into teaching as a life-raft career.

Professional football – for reminding us that no matter how successful we are, we will still make less money than grown men who give each other concussions for a living.

Star Trek: The Next Generation – for teaching me the only thing about science that I need to know: science is totally awesome and I’m gonna fly around on a spaceship some day.

I look forward to hearing your opinions about education, particularly if you think bicycle paths are a U.N. conspiracy.