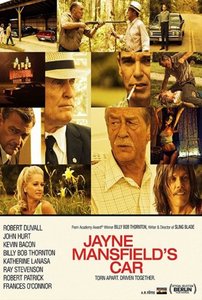 “Jayne Mansfield’s Car,” a movie starring Billy Bob Thornton and Robert Duvall that was filmed in Oakhurst two years ago, is finally coming to area theatres.

But to see the movie on the silver screen, prepare to drive. It opens Sept. 13 at the AMC Barrett Commons 24, all the way in Kennesaw. No other locations have been announced in the Atlanta area.

If you don’t want to travel that far or wait that long, On Demand already offers the movie for $9.99.

Though the movie features a lot of stars, it seems to have had a hard time making it to American theatres. Its world premiere was in early 2012 at the Berlin Film Festival.

Thornton, who won an Oscar for “Slingblade,” directed. The movie is set in 1969 Alabama and the culture clashes of the Vietnam era are a big part of the story.

In Oakhurst, scenes were shot at the Solarium and the shopping center parking lot in front of Family Dollar.

According to IMDb, this is the storyline: “A young man in the 1940s raises a family in Alabama after his wife leaves him for an Englishman and moves to England. When the wife dies, she leaves a request to be brought back to Alabama to be buried, and at that point the man hasn’t seen her in nearly 30 years. The two families – her original family she abandoned and her English family – meet and make an attempt to adjust to each other, with uneven results.”

Jayne Mansfield, the 1960s movie star, was killed in a grisly car accident. The wreckage is part of a carnival show that visits the Alabama town.

Other actors are Kevin Bacon, John Hurt, Frances O’Connor and Ron White. Scenes also were shot in LaGrange and Cedartown.