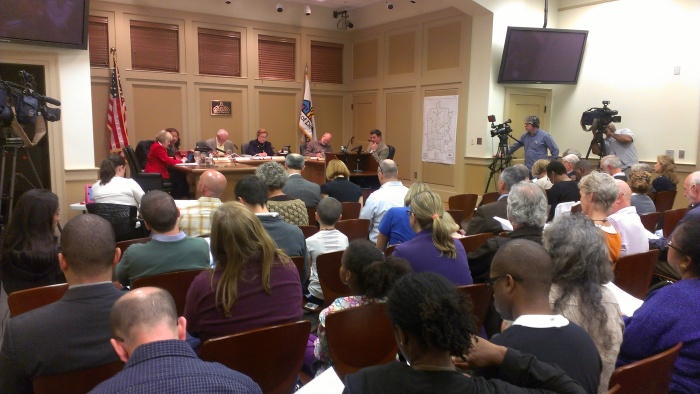 Commissioners voted unanimously in favor of the 90-day moratorium on tree removal, with Commissioner Scott Drake recusing himself due to a conflict of interest.

The vote capped a long public hearing that began around 8 p.m. and ended a little after 10 p.m. Builders and residents spoke to both issues, though it was clear from the comments that the tear-down moratorium was the more controversial of the two proposals.

The tree removal moratorium goes into effect Oct. 22 and will be in place until Jan. 24. That will give a city consultant enough time to provide a report as part of creating a Unified Development Ordinance for the city.

The city initially introduced both proposals at its Oct. 7 meeting as one moratorium, but on Friday announced it was separating the two: one for tree removal, and one for single family.

The tear-down moratorium would’ve placed a temporary hold on issuing permits for tear downs or redevelopment of single family homes, duplexes and adjacent buildings. A demolition is defined under the ordinance as removing more than 50 percent of the existing structure.

The tree removal moratorium will place a temporary hold on issuing construction or renovation permits to remove any healthy trees thicker than 12-inches in diameter at breast height .

The tree removal moratorium doesn’t apply to diseased or dangerous trees.  An arborist or “urban forester”  would have to make that determination, the city’s ordinance says. There will be an appeals process for people who believe their removal permits should be approved due to economic hardships.

Numerous tear downs in the city have agitated longtime residents.

As property values increase in the city, the taxes are becoming too expensive for some older residents. They are selling to developers who knock down older houses, replacing them with bigger, more expensive ones.

According to the city, as of Oct. 8 it had issued 23 tear down permits for Fiscal Year 2014, which began July 1. City Planning Director Amanda Thompson told the commission that since Oct. 14, the city received 20 additional demolition permits in anticipation of the City Commission enacting the moratorium.

Decaturish.com will post more information and video from this meeting later this week.