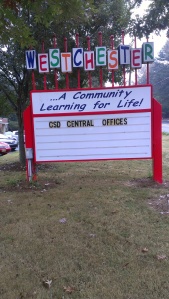 “Let’s be honest. Nobody’s going to be happy,” Edwards told me in a recent interview. “It’s not going to go perfectly well. Somebody will be unhappy.”

Unhappy has started to organize. A parents group, spearheaded by CSD parents Todd and Laura Cooper, is asking the school system to “Press pause” on its rezoning plan. The Coopers think CSD can come up with a longer-term plan to keep up with exploding enrollment.

“We urge our school board to temporarily halt the rezoning process to consider a more comprehensive, long-term solution,” the Coopers said in an open letter to CSD parents and school officials. “We are grateful for our children’s exceptional education, but they and their families also need stability.”

Edwards said the school system needs to move forward with redrawing the enrollment boundaries for its four elementary schools to make room for one more. The system plans to reopen Westchester Elementary in 2014. It currently serves as the CSD central office.

The BOE closed it in 2004 due to low enrollment.

I dropped by Westchester one morning to ask Edwards a few questions about the rezoning. A big picture of the current zoning map hangs in the lobby. It has the city divided into four quadrants. It was only a few years ago, in 2003, when the city had the opposite problem it has today. Elementary enrollment was too low. Now the system’s K-3 enrollment has jumped 75 percent since 2006, putting another 600 students into the city’s classrooms.

I had not received the Coopers’ letter before I spoke to Edwards, but our interview did cover many of the issues the Coopers raised.

Edwards said one of the main reasons she’d like to get the rezoning wrapped up by the end of December – and she concedes it may not happen – is to give parents enough time to prepare.

“Doing it this way is a lot less angst than waiting until March,” Edwards said.

One of the many concerns raised by parents is the ability of students to walk to their school. There are sidewalks alongside Scott Boulevard, the busy street in front of Westchester. Edwards said before the system closed Westchester, kids walked to school there, too.

Edwards said there isn’t much the school system can do to change Westchester’s location. She said the system will provide crossing guards to look after the children walking to Westchester.

The Coopers’ letter questions the role and purpose of the 4/5 Academy within City Schools of Decatur.

When Edwards arrived in 2003, one of the things she did was institute the 4/5 Academy and make the remaining four schools K-3 while turning College Heights into an Early Childhood Learning Center. (The President of the United States decided to get his picture taken at College Heights, as you’ll recall.)

Edwards said she did this at the direction of the Board of Education, which tasked her with developing a strategic plan.

The Coopers said turning College Heights into a K-5 elementary school should be part of a discussion about long term planning.

“Is there a possibility of turning College Heights into an elementary school, or changing F.A.V.E (4/5 Academy) and all the elementary schools into K-5 schools? These seem like questions worth exploring before we uproot communities from their established schools,” the Coopers wrote.

The Coopers’ letter laments the “Us-vs-Them” mentality that inevitably becomes a part of rezoning discussions.

Edwards said resolving some of the “Us-vs-Them” mentality was one of the reasons she suggested creating a K-3 system that feeds into 4/5.

“What I saw was, we had eight little schools doing their own thing,” Edwards said. “You didn’t have a school system. You had a system of schools.”

She said the school system was divided by the railroad tracks and by race. Prior to the 4/5 school, students were leaving the system after elementary school, Edwards said. Edwards believes that creating a kind of pre-middle school better prepared elementary students for the transition to Renfroe Middle.

It also cut down on discipline problems at the school, she said.

“Pulling them all together at the 4/5 made a huge difference at the middle school,” she said. “When I first came here, I would get calls (about kids fighting) almost every day.”

Edwards said as far as she knows, she is the first superintendent in Georgia to create a 4/5 school.

This will not be the final word on the rezoning, Edwards said. It’s ultimately a school board decision and there will be another community meeting at a date to be determined.

Edwards said in her experience, the school board doesn’t always approve things as quickly as she’d like. She wants a head start getting the system ready to reopen Westchester.

“I’m trying to give myself room,” she told me.