Avicii didn’t headline Atlanta’s first TomorrowWorld, but he was still there.

He’s got a beautiful song out right now called, “Wake Me Up.” I heard it at least a dozen times at various stages around the festival.

Meet America’s future. It’s a generation that wants to push the “fast forward” button on becoming an adult.

We want the wisdom of growing up without all the pain and experience. We are inheritors of an inherited legacy, passed down from our grandparents, to their children and – ultimately – to us.

America’s future isn’t bleak, far from it. We have a sense of entitlement but also share a touching enlightenment.

TomorrowWorld was a diverse and multi-cultural spectacle. People from all over the world came to Atlanta for this. I saw flags from dozens of nations flying high in the air. American flags were prevalent, both at the end of poles and as a fashion statement.

TomorrowWorld was also filthy and gaudy. By Sunday evening everything reeked of sweat and manure, which would be the case at most festivals I’m sure.

I should note here that electronic music is really more of my wife’s thing. I enjoy it but I’m not qualified to offer any more than a spectator’s view of the shenanigans. I was also only there for one day, Sept. 29, but that was plenty.

TomorrowWorld was an adult play-pen. It would’ve gone on forever, if the organizers allowed it. As I waited a grueling two hours to escape the parking lot, I had the dance station on my satellite radio blasting out of my car windows. The people walking by danced as they passed. 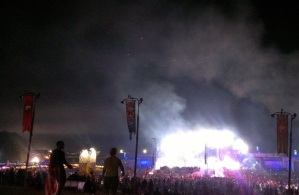 Remember: these are the same people who will get the codes to the nukes someday. Their development is critical to our survival as a species.

Yes, despite the best half-assed searches of vehicles by the festival staff there were plenty of drugs around TomorrowWorld. That’s true at a lot of concerts.

The Dance Safe tent was a fantastic resource for the festivalgoers. It had condoms and little post cards describing the effects of every drug that was likely to be on the premises. It resembled a Republican caricature of Democratic Party headquarters.

Some people were fried out of their skulls. There aren’t many places in the world where adults can consume astonishing amounts of narcotics and float around like a humming bird of some kind.

But that wasn’t the case for everyone. Believe it or not, getting astronomically high isn’t the only reason people go to festivals.

I actually was there for the music and the theatrics. I got plenty of both.

My main criticism of the festival was the half-assed organization of the parking. The festival organizers barely marked routes to the parking entrances. On the way out, none of the staff in Pacific Lot did anything to untangle the cluster of humans trying to leave.

When we finally did pass the staffers, they were sitting on their asses chuckling at the mess they’d created.

In America 2013, responsibility is overrated.