Decatur City Commission, School Board will drive 48 miles for retreat

Decatur City Commission, School Board will drive 48 miles for retreat

There’s a retreat between Decatur City Commissioners and City Schools of Decatur Board of Education Officials on Friday, Nov. 22. It begins at 8 a.m. and lasts until 5 p.m.

It’s a public meeting, but if you want to attend you might need to clear your calendar first. The meeting will be nearly an hour away, at the Charlie Elliott Wildlife Center in Mansfield, Ga., about 48 miles southeast of the city of Decatur.

During the meeting, the School Board and City Commission will talk about  … well, to be honest, it’s difficult to tell from this agenda posted down at City Hall. 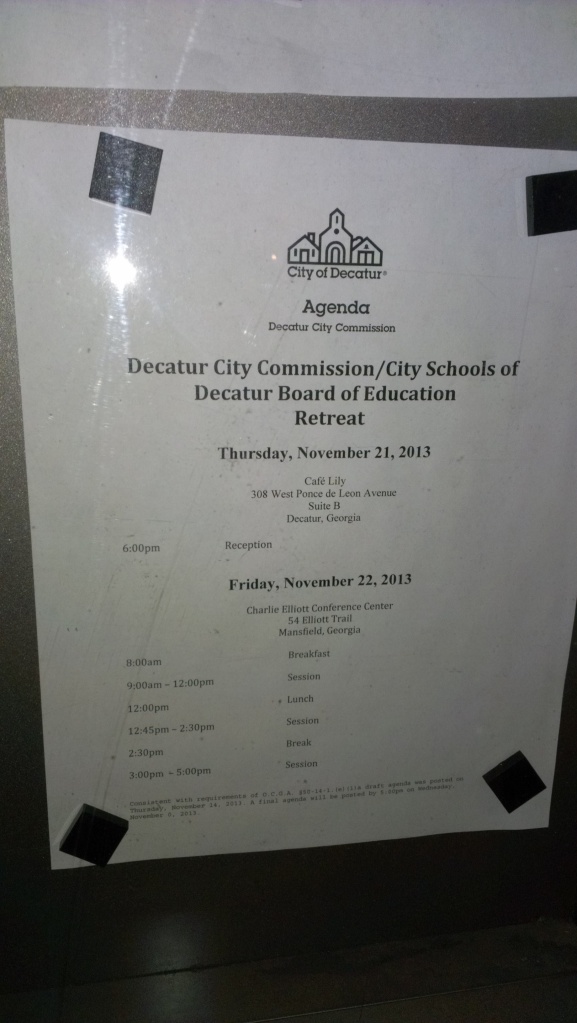 The meeting notice as posted outside of City Hall. The address listed for the Friday meeting is incorrect.

We can be fairly certain that lunch and breakfast will be served. If there’s a more detailed agenda, I didn’t see it. Also, the address listed on this flyer appears to be incorrect. That address would put you in the middle of some pristine Georgia farm land. When I Googled the Wildlife Center, it showed the address as 543 Elliott Trail, Mansfield, GA 30055.

I also didn’t see notice of this retreat posted anywhere on the city website as of Nov. 18.


I’m not trying to make a big deal out of this. I’m sure the retreat meets all of the technical requirements of the state Open Meetings Act (they might want to correct that address thing, though). UPDATE: The city commission sent over a corrected meeting announcement this morning. City Commissioners and School Board members can hold a retreat. How far they will retreat, however, is another matter entirely.

Based on my experience covering local governments, retreats sometimes go outside of city limits. When that happens the press seldom attends, much less the public. The economics of it aren’t worth it for most newspapers. You tie up a reporter all day for what may be one story, at best, and it will run inside the metro section somewhere.

I can’t attend because of my other obligations.

If the intent of the retreat was to provide the two parties some seclusion, Decatur wins this round. It’s my hope that some dedicated parents will attend and let us know what was said.

It’s not a secret that relationship between the Board of Education and City Commission is strained. The school system is coping with its growth and commissioners have some control over the school system’s destiny. If you’ll recall, in August commissioners unanimously voted to postpone a referendum on issuing school bonds.

Mayor Jim Baskett proposed a “blue ribbon committee” made up of school board members and commissioners that would examine issues related to the growth of the school system. City Schools of Decatur, meanwhile, has been exploring other ways to fund school construction projects.

The BOE and City Commission aren’t coordinating very well, and it shows.

For example: During last night’s City Commission meeting, commissioners voted to annex in several properties along McKinnon Drive and Kirk Road to clean up city boundary lines. Some parcels were split between the city and DeKalb, creating confusion about delivery of city services.

City Manager Peggy Merriss apologized for not notifying the BOE. Mayor Baskett said, “I think the school board in general knows we’ve been trying to clean up that area.”

He added, “If they have concerns about us doing some other kind of annexation, personally I think a conversation with them is absolutely in order.”

I guess we can assume they’ll get a chance to talk about it on Friday?

I’m going to step outside my reporter role for a second and make a respectful request of our city officials. If there’s any way to provide recorded audio or video of Friday’s proceedings and then post it to the city’s website, I think the city should do it. I’m sure there will be more than a few people (not just reporters, mind) who would be interested to hear what was discussed.

While this meeting complies with the letter of the law, I think it’s disingenuous for officials to discuss these important issues at a time and place that would be inconvenient for most of their constituents. Promises made during these proceedings would be meaningless, unless we have a permanent record of who is making them and why.

There are important issues facing the school system right now. I think our elected officials owe the public a transparent and honest conversation about how they intend to deal with these issues going forward.

Holding an open meeting an hour away from the city doesn’t set a high bar for transparency. Let’s hope the city will provide a way for us to stay engaged with our government.