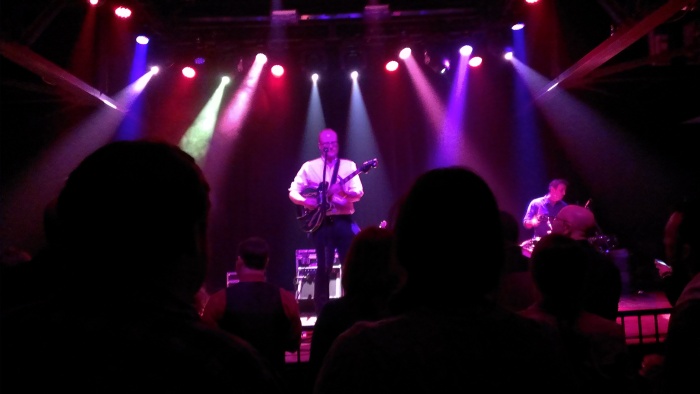 Soul Coughing is one of those bands that I like to hear but not one that I actively seek out. I don’t know that I own any albums, but I always stop changing channels when I hear them on the radio. Some bands are just like that.

Former front man Mike Doughty stopped by Atlanta on Nov. 20. He played at the Terminal West at King Plow. The opener was a group called Moon Hooch. They’re a trio consisting of two saxophone players and a drummer. I didn’t know what to make of them at first, but they grew on me.

Mike Doughty’s show was one of the more inside-of-my-own head concert experiences I’ve had. He’s a sarcastic, witty performer and his persistent slam poetry drone makes you glad that you like reading.

It was, for all intents and purposes, a Soul Coughing show. His spontaneity and ad libbing  made the material feel as relevant as ever.

The venue was definitely my speed. Terminal West has a bar and full restaurant menu. The cafe is adjacent to the main stage where it’s a little quieter but you can still hear what’s going on. There’s a shuttle service to and from the off-site parking lot. The show ended around 10:30 p.m. Most of the shows I’ve been to around here go until the wee hours of the morning.

Terminal West, a concert venue for 30-somethings with jobs.