The Mac is back

The Mac is back 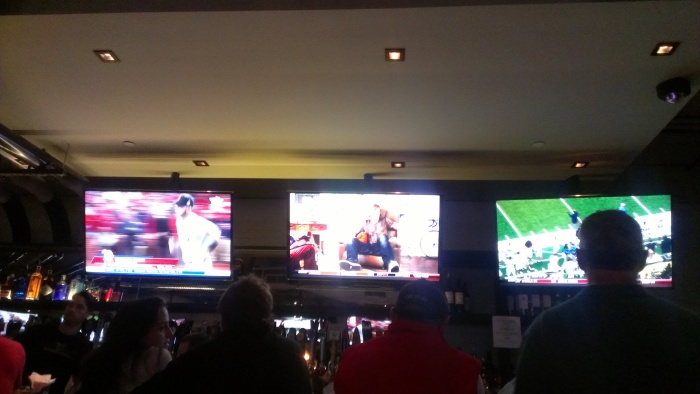 The Taco Mac in downtown Decatur recently reopened. I went there a few Saturdays ago and the place was slammed with customers.

Still, looks can be deceiving. I wasn’t quite sure what I was getting myself into and I was reluctant to try this particular Taco Mac again.

Taco Mac and I have a complex relationship.

We became friends in Chattanooga. The first time I tried Taco Mac’s famous wings, I was in a wing judging competition. I’m not sure what qualifications I have that make me a capable judge of hot wings, but I put Taco Mac in second place. I forget which wings I picked for No. 1, because they were one-offs made by a catering company.

I remember that the Taco Mac wings had a crispy texture and sat in a generous portion of orange-red sauce. They were a utility wing, a go-to when you needed your fix of fried foul.

The Taco Mac in Chattanooga was a slick operation. It constantly rotated people through the tables placed strategically around glowing panels. It was efficient amusement.

Taco Mac came from Atlanta, I was told. When I moved here, I assumed the food of the motherland would be superior to the food in the Chattanooga colony. The food from the original Atlanta Taco Mac in Virginia Highlands was consistently good stuff. It came out of the kitchen glowing with glaze, like a polished car off an assembly line. The texture and taste checked out. I am particularly in love with the Habanero barbecue flavor. Atlanta’s Habanero didn’t blow my mind, but it didn’t let me down either.

It’s been hit or miss everywhere else in Atlanta. I once got a plate of wings at the Taco Mac in Philips Arena that had a chicken feather on it. When I started to complain, my wife said, “What’s your problem? It’s a chicken! Of course it would be a chicken feather!”

We moved to Decatur in 2012 and both agreed that the Taco Mac here missed the mark in a big way. It was a raging failure. The wait staff glared at the customers coming through the door like they were clowns showing up at a funeral. It was as if they were saying, “How inappropriate for you to go to a restaurant and expect us to feed you.” I had never eaten at a place where the staff was maliciously rude. One time I had a waiter walk away from me while I was in the middle of asking for ketchup. When the waiter returned, he slammed a ketchup bottle on my table and walked away again without saying a word.

For the record, this is how the Taco Mac queso is supposed to look. (I got this when I visited the recently-renovated Decatur location. Delicious.)

The food didn’t live up to Taco Mac’s polished standards, either. The wings were soft and a little slimy. The fries were occasionally cold. The queso sometimes arrived fully congealed in the bowl. It’s supposed to congeal in our arteries, not on our table.

In summary, it sucked ass. When the Taco Mac closed a few months ago, I hoped it would be replaced by something else. I was annoyed when I heard it would be reopened as Taco Mac. Couldn’t they put a gas station there instead?

When we saw the renovations wrapping up, we got curious. The restaurant looked like it was going to be closed forever and its boarded up presence was only slightly less sketchy than its open one.

After a few more days, they removed the fence from the parking lot and the boards from the windows. From the outside it looked like an upright establishment, but looks can be deceiving. When it comes to a sports bar, it’s what’s on the inside that counts.

We were drawn to the rows of glowing TV panels. There were many viewing and drinking options that you never had to worry about thinking a single thought. The floor was so new that my feet slid on it a little. The waiters hustled and smiled.

Overhead there were rows of pipes delivering beer to the taps behind the bar. The bar tenders at every Taco Mac location keep asking me to enroll in their Brewniversity, but I explain to them that I attended the University of Alabama and Brewniversity was my safety school.

From the patron’s perspective, a good waiter in a busy sports bar is inherently a contradiction. They must be fast and attentive to every customer in a crowded room, but still find a way to stay charming. Watching sports requires everything to be uncomplicated and within arms reach. You don’t want food that merits deep consideration of the plating. It goes: reach, eat, watch.

A waiter has to approach it with a light touch. The slightest miscue could offend the primitive creatures smacking on wings and glowing in the light of a hundred vibrant screens overhead.

The waiters were elbows out, but the elbows had softer edges. They checked our orders after we gave them and brought them to our table within minutes of ordering. They were polite, but direct. When one person at my table got a little cranky while trying to communicate an order, the waiter handled it with aplomb. Soon another smiling waiter appeared to provide some additional support.

From what I could tell, the owners have completely replaced the wait staff. That alone would’ve been a dramatic improvement. Throw in a few million dollars for renovations (I’ve forgotten the exact figure the waiter gave me) and all of a sudden you’ve turned an eyesore into one of Decatur’s premiere restaurants.

Good things are happening over here near Commerce and West Ponce. For awhile, the Taco Mac was like a black hole dragging on everything else around it. Now it has become one of Decatur’s best. I applaud the owners for not screwing this up and for releasing quality control back into the atmosphere of its Decatur location. I even shook your shift manager’s hand and thanked him.

It’s a refreshing change, one that I never thought I would see, much less welcome.

The Taco Mac is putting all of the other restaurants in Decatur on notice. The Mac is back.