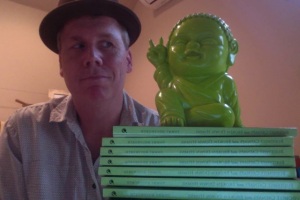 Tommy Housworth (He’s the one wearing the hat.)

Tommy Housworth, a lifelong Decatur resident and a professional writer, will be reading from his new collection of short stories this Sunday.

Housworth works as corporate writer, and also is the head writer for the upcoming Cooking Channel show, “How to Live to 100.” He describes it as a “vegan cooking show/sitcom.”

Housworth will be reading his new material Sunday, December 8th, 2013, 7:30 p.m. at Theatrical Outfit, located at 84 Luckie Street NW, Atlanta GA 30303. The reading will include bits of live theater. Atlanta actors Steve Coulter, Mark Kincaid, Rob Lawhon, Tara Ochs and David Silverman will be a part of the show, too. Admission is free. There will be a book signing afterwords and you can buy a copy for $14.

The new collection is called “Buddhist Catnaps & Broken-Down Hymns” and it features characters who are in pursuit of redemption. From the press release: “An art critic becomes obsessed with an exhibit by a provocative performance artist. A man takes in the widow of a migrant worker after her husband is gunned down at the Texas border. A photographer faces a personal crossroads after being the sole witness to a suicide jump from the Golden Gate Bridge.”

As you might have guessed, Buddhism is a common thread throughout the book.

“The title comes, in part, from a quote by Kurt Vonnegut, in which he likens short stories to being similar experientially to Buddhist meditation,” Housworth’s press release says. “(Housworth) said that it allows one to delve deeply into the story and come out of it revived and renewed, like taking a Buddhist Catnap. A few of the stories have a thread of Buddhist thought running through them as well.”

Housworth lists his influences as follows:

So to sum up: There’s a local artist, he’s selling a book and he’s reading it Sunday. He’s also writing a vegan sitcom. I’d be lying if I told you I wasn’t a tad interested in what that’s going to look like.