How may we serve you? Decatur MLK Service Project, Day 1

How may we serve you? Decatur MLK Service Project, Day 1 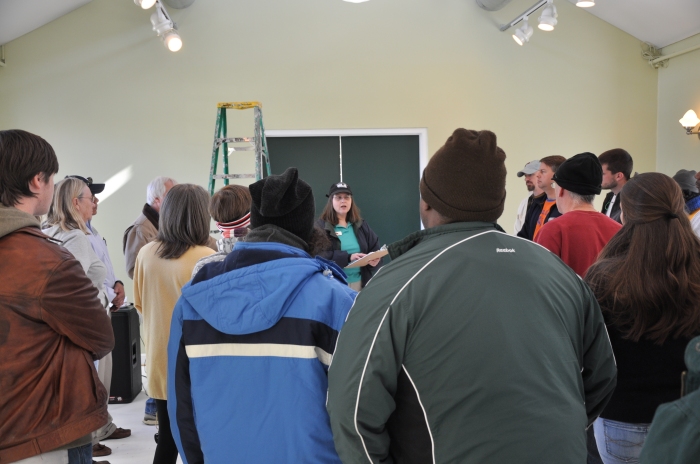 Lee Ann Harvey, the city of Decatur’s Lifelong Community Coordinator, on Jan. 18 talks to volunteers who have signed up for the city’s annual MLK Service Project. Photo by: Dan Whisenhunt

The organizers of the MLK Service Project, which began in 2003, say that one of the most unpredictable things about it over the years has been the weather.

Volunteers have worked in icy rain and chilly overcast days. The weather was agreeable on Jan. 18, the first day of the three-day event. The volunteers stood in a wing of The Solarium in Oakhurst and looked down at their phones while they waited for someone to give them a task. Sunlight poured through the tall windows of the room, a place that was once part of a convalescent hospital.

Paul Mitchell, chairman of the MLK Service Project, stood in front of a ladder at the back of a room, holding his clipboard.

The volunteers listened as he assigned their chores and recited a list of safety instructions. Use a spotter to hold ladders. Be careful kneeling, because there might be broken glass on the ground. Don’t overfill the dumpsters.

There were 24 homes on his list, some in need of major repairs and some that just needed some maintenance. They are the homes of elderly people who live on a fixed income. They have trouble getting around and can’t afford to pay someone to do the work for them.

Louis Rice, a local attorney, pulled some Decatur High School students off to the side to brief them before sending them out with bags and rakes to do some yard work.

Louis Rice, a local attorney, talks to some Decatur High students before sending them out to do yard work as part of the Decatur MLK Service Project. Photo by: Dan Whisenhunt

Mitchell gathered up a batch of mustard-colored building permits and made the rounds, dropping them off at homes with larger projects.

He stopped for a minute to speak to Carrie Evans, who has lived in Oakhurst for 16 years in a brick house she inherited from her grandparents. Her street is different now. She described what the neighborhood was like when she first moved in.

“Drugs here,” she said, pointing to one home across the street. “Drugs here. Now, it’s beautiful.”

Paul Mitchell, chairman of the MLK Service Project, speaks to Carrie Evans, an Oakhurst resident, on Jan. 18. The three-day event helps elderly, low-income residents who have homes in need of repair. Photo by: Dan Whisenhunt

Evans said her new neighbors come to check on her when she’s not feeling well.

At another house, Doug Thompson was building wooden forms to hold the concrete for a wheelchair ramp. He’s been participating in the MLK Service Project for seven years.

“It’s one of those things that make you feel good, contributing to your neighborhood, helping people,” Thompson said. “I enjoy doing this kind of work anyway.”

Jan. 18, 2014 Doug Thompson takes a break while building the wooden forms that will hold concrete for a wheel chair ramp. Thompson has participated in the MLK Service project for seven years. Photo by: Dan Whisenhunt

There’s still plenty of work left to do. The Service Project will resume Sunday at 1 pm and Monday, Martin Luther King Jr. Day, at 9 am.

Any volunteers are welcome, the organizers say. All you have to do is show up at The Solarium in Oakhurst, located at 321 West Hill Street. They’ll put you to work.