So emergency planning is one of the government’s key functions, along with educating kids and cutting ribbons in front of businesses that just got a bunch of tax breaks.

And yet somehow Atlanta managed to turn yesterday’s snow storm into a category five catastrof&^!.

Students and employees were stranded, spending the night where they spent the day. The traffic maps looked like something a doctor would show a patient right before emergency heart surgery. 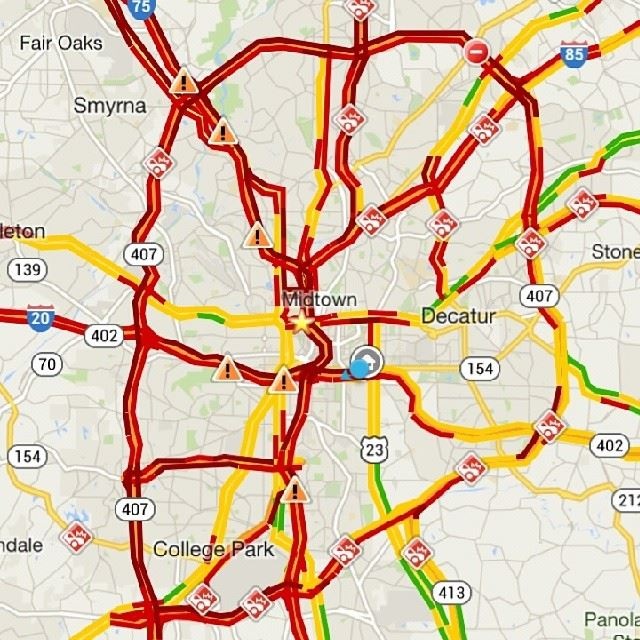 Atlanta INtown reports today that Gov. Nathan Deal has been doing a lot of damage control this morning as reporters pelted him with snow-related questions.

From the INtown article:

Reporters hammered Deal and his staff with questions about the state’s preparedness for the storm and questioned why a state of emergency wasn’t declared before the storm hit and why local meteorologist’s predictions were ignored. Deal said the state relied on the National Weather Service models, which showed metro Atlanta would not bare the brunt of the storm.

The Georgia Emergency Management Agency Director Charley English said the emergency operations center was only partially operational by 3 p.m. on Tuesday and appeared clueless to the condition of metro roads, denying they were heavily gridlocked. Deal quickly cut him off and disagreed with that assessment.

“I’m not going to get into the blame game, but the crisis that we are going through is across the region. If you look at anybody’s street in any community across the entire region, there’s no one doing a better job than we are in the City of Atlanta.”

I’m not sure what the measuring stick for this is, but Reed and Deal aren’t a hit with critics this morning. To be fair, it’s a tough room when your audience has been reduced to tears after spending an eternity in traffic.

I wasn’t  stuck in the traffic yesterday (thank God), but by all accounts, it sucked so much ass. Atlanta was ridiculously unprepared for this. There were a few obvious mistakes, including the decision to open schools on Tuesday. School traffic is the backbone of congestion in Atlanta. When schools dismissed early, parents rushing to pick them up collided with other people trying to leave early before things got even worse. Calamity ensued.

My friend Victoria Mitchell gave a concise, thoughtful explanation how Atlanta managed to screw this up.

“I would imagine that mobilizing GADOT to load the sand/salt trucks *before* things started getting bad would have been a prudent measure, especially given the way that the season has been going thus so far. (Seriously, this was foreseeable.) Other than that, this is NOT the first time that we’ve had a snow storm during the middle of the day and had to send everyone home (and this wasn’t a major snow storm by any stretch of the imagination.) There are ways to clear out a city and not screw it up royally,” Mitchell told me. “This wasn’t it. Releasing businesses, schools, and local government all at the same time with roads not having already been treated? Yeah, that was a guaranteed catastrophe. Alpharetta is so bad that I have friends who have been on the roads for twelve hours and no end in sight. People abandoning cars, wrecks everywhere. This was a complete and total lack of planning for something that we knew about last week!”

Yep. According to the AJC, people are still stuck on the roads today. I hope we can get these folks off the road and back home soon.