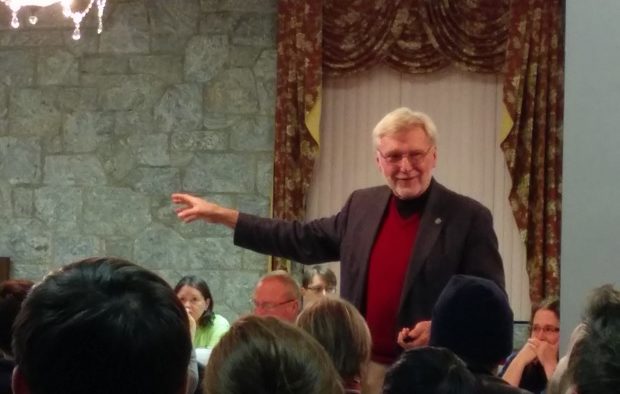 Architect Richard Taylor speaks to the Kirkwood Neighbors’ Organization on Jan. 10, 2014, discussing his vision for redeveloping the Pratt-Pullman Yard.

A team of developers has dreams for the Pratt-Pullman Yard, a historic site in Kirkwood that’s covered in graffiti and owned by the Georgia Building Authority.

On Jan. 10, the Kirkwood Neighbors’ Organization voted to support plans for redeveloping the 26 acre site. Two of the team’s members are architect Richard Taylor and real estate investor Stan Sugarman. Their vision would see the development become town homes sharing a communal back yard space.

Taylor explained his vision for the project, calling the buildings “among the most handsome pieces of architecture in Atlanta.”

“It needs renovation in a way that it becomes the icon” for Kirkwood, Taylor said.

KNO President Jeff Childers sent along some additional details about the project after the meeting. According to Childers, the project will include:

– The historic structures will be office and event space with a potential restaurant space.

The developers said they want to incorporate as much of the historic structures on the property as possible. The GBA, which purchased the property in the 1990s according to an article by Creative Loafing, and has contemplated selling it.

A majority of Kirkwood Neighbors voted to support the plan, with the condition that developers make every attempt to preserve the historic buildings and would not develop apartments on the property.

According to the Creative Loafing article, munitions used by World War I soldiers were made at the Pratt-Pullman Train Yard and it was one of the largest employers of blacks in in America in the 1920s. More recently, its served as a set for movies filming in the area, most notably “The Hunger Games.”