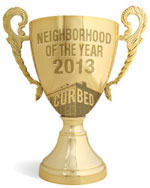 Residents in Atlanta’s Kirkwood community voted in droves to win Neighborhood of the Year status in a contest sponsored by Curbed Atlanta.

Curbed Atlanta, which focuses on local real estate news, reports that more than 6,600 people voted in this year’s Curbed Cup competition. Kirkwood received 50.2 percent of the vote, the website reported.

“The difference between victor and runner-up this year was decided by just 23 votes,” the Curbed Atlanta article says. Grant Park was the runner up.

Almost as soon as the award was announced, allegations of vote-rigging erupted in the comments section. Curbed Atlanta editor Josh Green posted a comment responding to the criticism, saying the contest was all in good fun.

“If cheating won it, then K-wood was king of surreptitious vote-rigging this year,” Green writes. “There’s a system in place to ferret that stuff out, but nothing’s perfect. Across the U.S. the winners aren’t always the “best” or most coveted neighborhoods but the ones that have enough chutzpah to galvanize themselves to vote en masse. This is supposed to be fun and a means to spotlight a community’s attributes, but smack-talk is human nature. And it can be hilarious.”