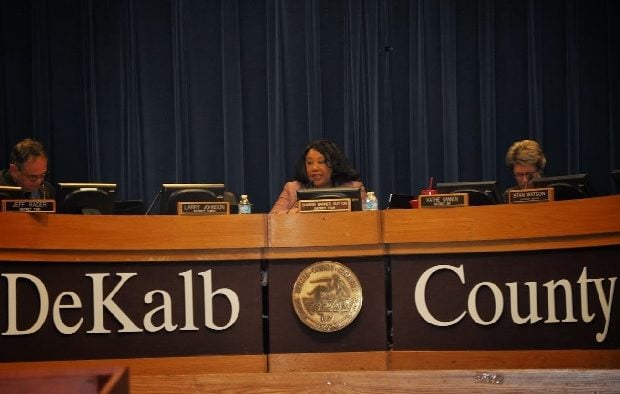 Sutton delayed the award of a contract to rebuild a fire station in Avondale Estates, saying she wanted to resolve some legal questions about whether new cities could take over county buildings. The commissioner’s explanation didn’t make much sense. The fire station already is in Avondale Estates and the city isn’t interested in taking it from the county, Mayor Ed Rieker told me.

So what the heck is going on here?

Former Clarkston mayor Emanuel Ransom, who was defeated in the 2013 elections, was blunter about Sutton’s treatment of his city.

“She’s terrible,” Ransom told me. “She’s one of the worst commissioners we’ve ever had in the fourth district.”

Patricia Wheeler, the mayor of Stone Mountain, said there weren’t any projects in her district that Sutton delayed. Then again, Wheeler said she didn’t have that much interaction with the city’s representative on the DeKalb County Commission.

“She is pretty hard to get a hold of sometimes,” Wheeler said. “That’s probably my biggest concern with her, that sometimes it’s hard to get in touch.”

I’ve been trying for several days to reach Sutton for comment, but she hasn’t returned my phone calls either. That’s too bad, because I’d really like to give her an opportunity to respond to the comments made by mayors in her district.

Ransom and Rieker both told me about projects they allege Sutton delayed, and the circumstances sounded similar to what’s happening with the Avondale Estates fire station.

Rieker said that when Avondale Estates and the city of Decatur annexed property in 2012 so their boundaries would meet at Sams Crossing, there was some discussion that Avondale Estates would buy the adjacent Lanier Park. The county never sold the park to Avondale Estates, however.

“It went through the staff and got to the commissioner. It just was delay, after delay,” Rieker said. “We’d go over there and sit for two hours and they’d say we’re going to send it to another committee. So finally, we just quit going. They just decided not to sell it to us. There wasn’t any real reason, like they needed it for anything, because it’s a little pocket park. I think they thought they were doing us a favor somehow by selling it to us. Really, we’re fine without it. It’s just extra work for us.”

Ransom said Sutton repeatedly blocked the extension of a PATH trail that will fill in a gap where the trail crosses over I-285 through Clarkston. When finished, the trail would be a seamless connection between Atlanta and Stone Mountain.

“It’s just a pattern that she has,” Ransom said. “I think she only works for specific areas in our district. The other areas she could care less about.”

“It wasn’t an unreasonable request, in my opinion,” McBrayer said. “I think if there was any problem with it, it’s the fact the commissioner didn’t communicate her problem with the project adequately. We lost several months not knowing why the project had stalled.”

I should point out that McBrayer declined to express an opinion on Sutton’s conduct and he recounted the events to me in a matter-of-fact fashion. He suggested that the delay of the PATH project might have more to do with Sutton’s relationship with Ransom.

“It was obvious there was no love lost there,” McBrayer said.

Based on what I’ve heard from these sources, I’m concerned about the delay of the Avondale Estates fire station project. Delaying a walking path project is one thing. Its use is strictly recreational. But a fire station? That’s a different matter entirely.

As Rieker pointed out to me, it isn’t just Avondale Estates that counts on that fire station. There are portions of unincorporated DeKalb County that depend on it too.

If Sutton continues to delay this project, I think she should provide a more thorough and compelling explanation for her actions.

Government exists for two primary reasons: to educate children and to provide for the public safety of taxpayers.

If Commissioner Sutton is playing politics with the safety of her constituents, then she is failing them at a fundamental level.

I hope that’s not the case. I will continue trying to reach her to give her an opportunity to respond to these claims.

I’ve left her a couple of messages. The commissioner has my number.