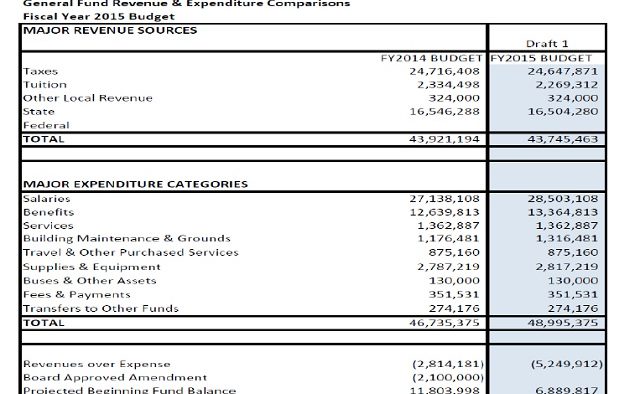 This is the summary page of the first draft of the City Schools of Decatur FY2015 budget.
Share 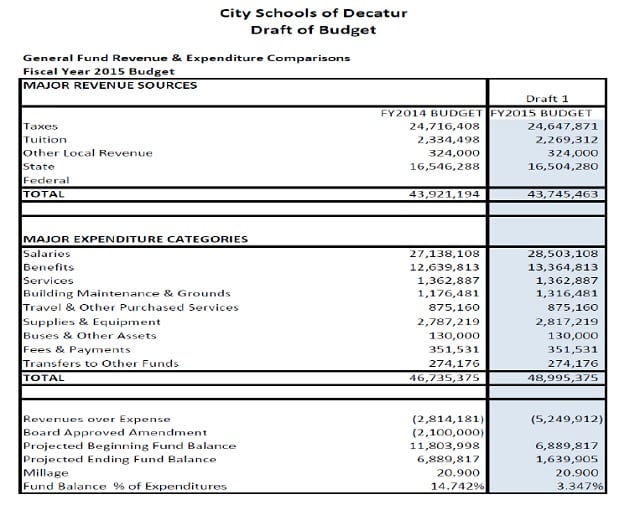 This is the summary page of the first draft of the City Schools of Decatur FY2015 budget.

City Schools of Decatur has released a draft of next year’s budget, and salaries are expected to increase by $1.4 million.

According to Finance Director Susan Hurst, that money will cover about 17.5 new positions: 11.5 at Renfroe Middle and 6 at Decatur High. Hurst said CSD in October amended its current year budget, increasing it by $952,000 to accommodate the reopening of Westchester Elementary this fall.

In government accounting, fiscal years often differ from calendar years. In Decatur’s case, the fiscal year begins on July 1 and ends June 30. Currently Decatur is in Fiscal Year 2014 and this draft is for fiscal year 2015.

Hurst said the numbers are preliminary and will likely change between now and the time the board approves the budget. She said the school has typically received more in revenues than it has projected. She said she would amend the budget to show what CSD usually projects and compare it with what it actually receives each year.

“We tend to spend about 93 percent of what was budgeted, on average,” Hurst said.

Hurst said the budget also cannot predict what the state Legislature will do this year. She said Gov. Nathan Deal has proposed adding $457 million to the state education budget, which could make a big difference in what school systems receive.

Remember, Hurst said, this is a draft.

“If everything stays the same as of today, this is where we’ll be and if we get more information that will change,” she said.