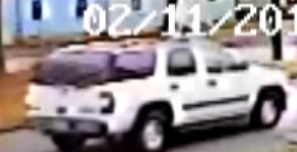 Decatur Police report that there was an attempted burglary this evening on the 400 block of Third Avenue.

Police Sgt. Jennifer Ross says a concerned neighbor saw a white Chevrolet Tahoe pull into their neighbor’s driveway and turn around behind the home. The witness told police that a man wearing a ski mask and a gray hoodie exited the front passenger door of the Tahoe, walked onto to their neighbor’s back porch and used “some type of blade” to try and pry open the back door. The suspect saw the witness watching him and ran back to the Tahoe. Nothing was stolen, Ross said.

Also, at about 8:30 pm Decatur Police responded to a burglary in the 800 block of Third Avenue that happened between 5:45 pm and 8:30 pm. The suspects forced open a gate and then the home’s back door.

The vehicle in the first incident is also the same kind of vehicle suspected in other burglaries in Decatur and Police Zone 6 in Atlanta, which includes Kirkwood. Decatur Police did not say if they thought this  burglary was connected to those incidents.