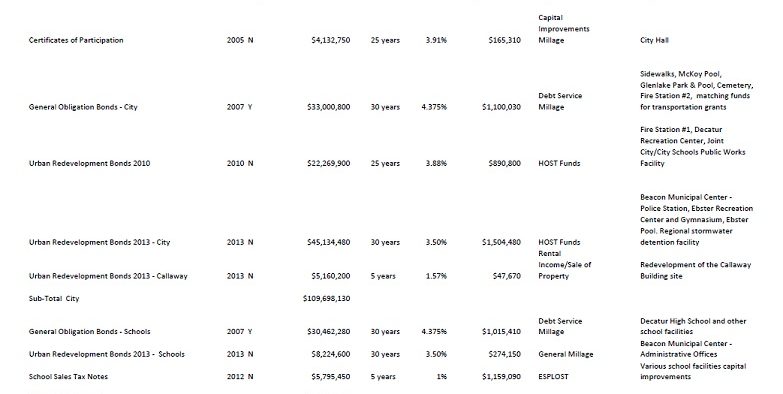 During a public forum on Jan. 22, former Decatur City Commissioner John Ridley made a shocking claim.

He said the city owes more than $100 million in debt, and most of it wasn’t approved by voters. Ridley said the city’s debt isn’t sustainable, long-term.

State Sen. Fran Millar was visibly taken aback, saying he’d never heard that. It came as a surprise to most of the people in the room. Ridley, who served on the City Commission from 1998 to 2002, made his comments as part of a hearing on proposals for new cities in DeKalb County.

City Manager Peggy Merriss said the city has borrowed $154.2 million since 2005, but said the city is in good financial health. Most of that debt, $90.7 million of it, did not require a public vote.

“The financial well-being of the City of Decatur is something we take extremely seriously,” Merriss said. “Comments like (Ridley’s) are not a true representation of the city’s overall fiscal condition and are detrimental to the city’s economic vitality and reputation. I hope that anyone who knows the City of Decatur would share in a sense of disbelief and frustration that such misleading statements are being made.”

Here is a list of the city’s debts, including the years issued, the funding source and the projects financed. 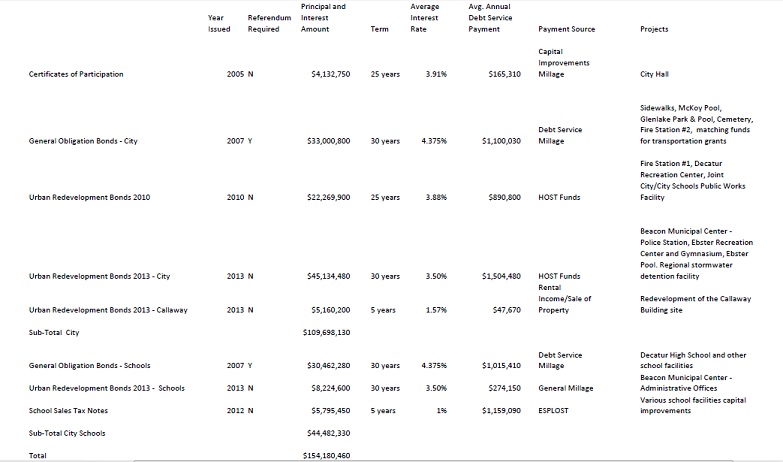 Decaturish.com received a detailed list of all the debts the city currently owes. The city backs municipal and school debts. The annual debt payment is $6.2 million. The money financed projects like the Beacon Municipal Complex and school expansion.

According to information provided by the city, the only borrowing approved by a public referendum was $63.5 million in general obligation bonds issued in 2007.

The city borrowed $58.5 million in 2013, almost 40 percent of the current outstanding debt. That debt was issued using Urban Redevelopment Bonds, which didn’t require a vote. Most of that money is being used to pay for the Beacon Municipal Complex, scheduled to open this year.

Ridley said most of the debts were issued using Certificates of Participation, commonly known as COPs financing. According to information Merriss provided, only $4.1million of the city’s current debt was issued using this financing method, which involves lease-purchase agreements. Recently City Schools of Decatur has considered issuing more COPs debt to renovate and add space to the city’s schools.

The former city commissioner said the city has gone on a “spending spree” and in the process sidestepped the will of the city’s taxpayers.

“They were unconstitutional,” Ridley said, referring to COPs financing. “It allowed the government to borrow money outside of the normal way of doing it through a bond referendum.”

• In 2010 during the height of the recession, the city’s bond rating was upgraded by Moody’s Investor Service from Aa3 to Aa2 and by Standard & Poor’s from AA to AA+.

• Since 2007, the city has added over $2.5 million to its total operating fund balance (revenues over expenses) for a total of over $8.3 million in fund balance. .

• Annually the city has received a clean opinion from our auditors and for the past two years there have been no audit findings – something that is extremely difficult to achieve under current auditing standards. We go beyond financial requirements by preparing a Comprehensive Annual Financial Report (CAFR) and we have annually obtained the Government Finance Officers Association’s “Certificate of Achievement for Excellence in Financial Reporting.”

• Again, during the height of the past recession, the city was also able to slightly reduce its millage rate.

• The city takes in sufficient tax revenue and other general revenues to fund its budget and does not borrow to cover day-to-day operating costs.

There’s a portion of the city’s debt that will need reexamination in the future: $67.4 million of it is supposed to be repaid with a Homestead Option Sales Tax, or HOST. But as new cities form, HOST revenues for older cities decline.

Merriss said the city hasn’t studied how declining HOST revenues would affect the city’s ability to repay those debts.

“When the bonds were approved and before they were issued, the City Commission committed to using HOST proceeds as the first source of meeting annual debt service repayment requirements,” Merriss said. “Should HOST proceeds not cover the debt service payments, the city is still responsible for the repayment and we will need to make decisions about repayment sources at that time.”