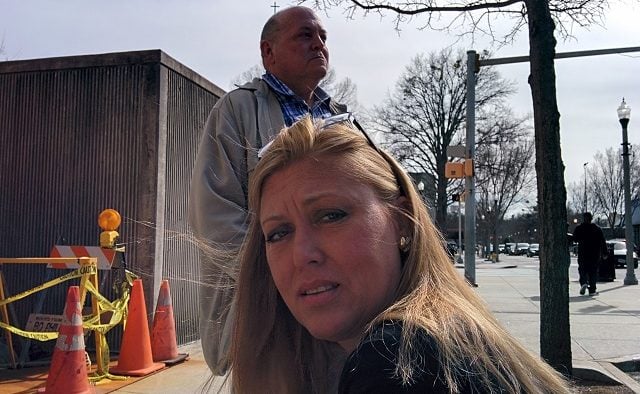 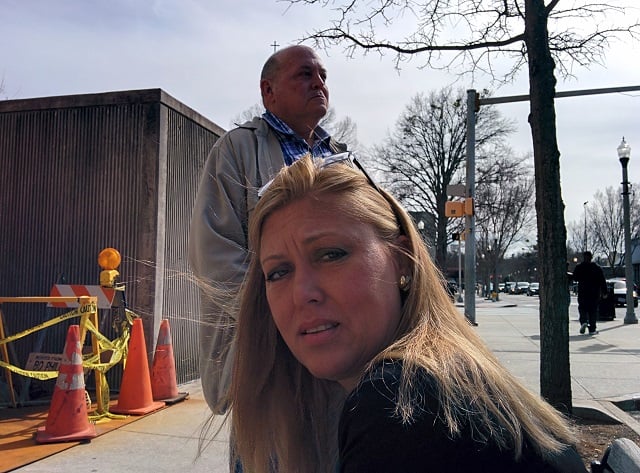 Bill Bibb and Vicki Elders take a smoke break outside The Seen Gallery in Decatur, Ga. The store will be closing soon. Photo by: Dan Whisenhunt

Bill Bibb and Vicki Elders are confronting the stages of their grief.

Bibb is closing The Seen Gallery on Church Street in Decatur where Elders is the gallery’s manager, but he hasn’t made the official announcement yet. He hasn’t set a closing date, but said it will probably be gone within a month. Most of the art in the store is on sale.

He wants to stay involved in the arts in some way, even if it’s not always the easiest path.

“Art is one of the toughest businesses you can be in,” Bibb said.

Bibb barely resembles the man pictured in the photo on The Seen Gallery website. The long brown hair has faded into wisps and his eyes have lost their confident gleam.

Bibb takes frequent smoke breaks. He alluded to other difficulties outside the art business, but didn’t go into detail.

The main thing driving his decision, Bibb said, is a disagreement with the building’s landlord. Bibb said the landlord asked him to sign a three-year lease, but he doesn’t think he can make that much of a commitment. 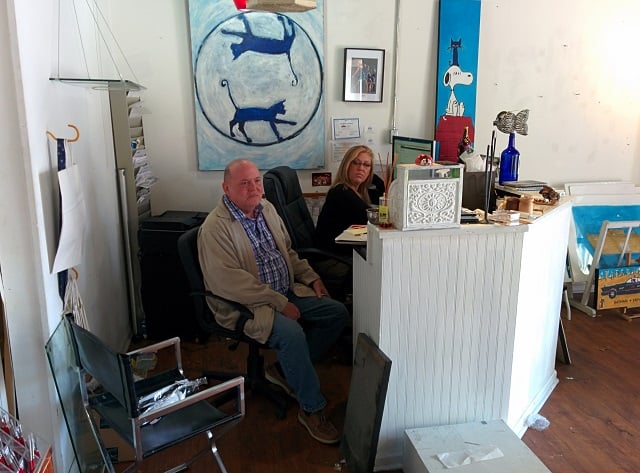 Bill Bibb and Vicki Elders wait for customers on a Saturday afternoon. Bibb owns The Seen Gallery in downtown Decatur, Ga. The business will close soon. Photo by: Dan Whisenhunt

He’s lived in Decatur since 1978 and is a professional photographer. The Seen Gallery opened in 2002. In 2008, Bibb closed the Oakhurst location and moved to his present spot in Decatur’s downtown.

Decatur’s been good to him, Bibb said. The city and the arts community have been supportive in every way.

“Whatever success we’ve had, I owe to the city of Decatur,” he said.

The Gallery is perhaps most famous for its paintings of Pete the Cat by artist James Dean. There’s a painting of the famous blue cat with the rolling eyes on the wall behind Bibb’s desk.

Elders is the gallery manager. She met Bibb a few years ago. She’d been laid off from her job as an accountant Georgia Pacific and passed the gallery as she went to the Decatur Library every day. One day she stopped in and brought her sketch book.

Bibb encouraged her talents and gave her a job. She became manager in November of 2012.

The Seen Gallery has tended to be a shore where broken people wash up.

There’s a homeless man who hangs around the store named Moses. Elders and Bibb always give him a cigarette if he asks for it. One of their artists, Gary Simpson-cox, struggled to find stability in his life. He specializes in finishing off his paintings with flames shooting from cans of spray paint. Bibb thought he had potential. He still has some of Simpson-cox’s paintings for sale, but the artist left town and Bibb hasn’t heard from him since.

“My philosophy has always been the artists come first, the customers second and us third,” Bibb said.

Bibb said there was a moment where he could see his gallery turning into something more than a local shop on Church Street. He said he has a stable of talented artists. The gallery just needed to become a draw, something that would attract collectors from all over the metro area and the region.

“I feel like we were on the cusp of becoming a driving force,” Bibb said. “It’s just unfortunate that everything happened at once.”

Bibb says he’s at peace with it all. Once he made up his mind to close, “It was this huge weight that had been lifted off my shoulders.”

On Saturday afternoon, Stan Orkin walked through door after he saw the sign advertising the art sale. He’s lived in Decatur for 10 years and The Seen Gallery is a familiar presence for him. When Elders told him that the store was closing, he got choked up.

“It’s just always been here,” he said, with tears in his eyes. “I’ve never been to (an art gallery) where I could afford a lot of things.”

Orkin said there’s a painting of Pete the Cat hanging on the wall at his home.

“I look at it and smile every day,” Orkin said.

After Orkin left, Bibb and Elders talked about the future again. What will they do when the gallery closes? Where will they go?

“Who knows what we’re going to do,” Bibb said. He said that whatever it is, “Art will always be our focus.”