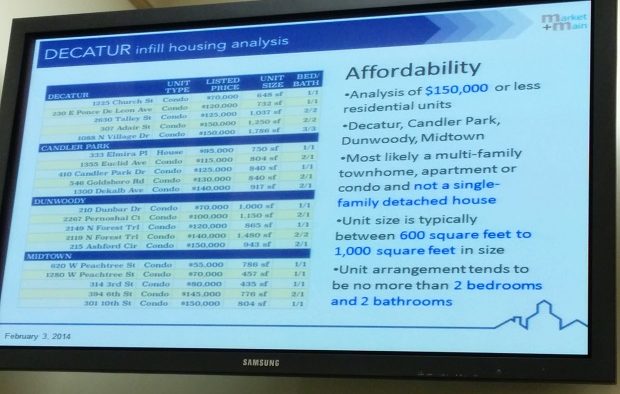 City consultant Market + Main studied Decatur's infill housing. This page is part of that study, which was presented to City Commissioners on Feb. 3
Share 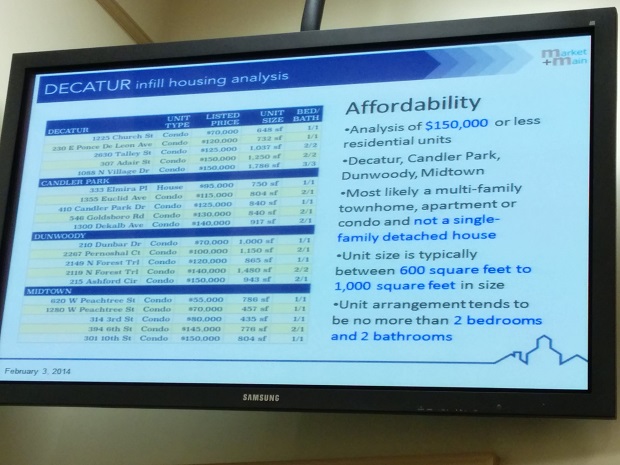 City consultant Market + Main studied Decatur’s infill housing. This page is part of that study, which was presented to City Commissioners on Feb. 3

A city consultant says Decatur has a variety of tools it can use to control infill development without creating new historic districts.

Aaron Fortner, a principal and co-founder of Market + Main, suggested other ways can achieve its goals of promoting housing affordability while retaining the character of neighborhoods. Fortner spoke at the Feb. 3 City Commission meeting.

“It’s the strongest form of protection,” Fortner said of historic districts. “Because of that, it’s the hardest thing to change. It just needs to be in your tool box.” The city lists four historic districts on its website: MAK District, Clairemont District, Ponce de Leon Court and Old Decatur District.

Fortner said with different design standards, developers could tear down older homes and replace them with new ones with smaller lots.

“The thought here is not to have a backdoor way of doing historic preservation…, ” Fortner said. “With good design standards you can tear the building down. It’s about new construction, but you just have to look at it a certain way.”

The trade-off would be an increase in overall density. Mayor Jim Baskett said having a higher density of single family homes would “create more pressures on a school system that already can’t handle the pressures it’s under.”

Fortner presented some statistics on tear-downs and infill development in the city.

The study found the homes that are the most affordable on a middle class salary are condos, town homes or apartments with about 600 to 1,000 square feet of space.

The consultant suggested the city consider:

– Consider “massing limits” that would control the form and mass of single-family, side yard height planes on individual lots.

– Consider requiring accessory dwellings for new construction that could be up to 1,000 square feet, with the goal of providing affordable housing options.

– Implement some “design guidelines” for neighborhoods that would preserve the character of a neighborhood without designating it as a historic district.

– Consider requiring that multi-family developments have a certain percentage of units that are 600 to 1,000 square feet.

– Promote the creation of duplexes with design standards that would preserve existing historic homes.