Leave – Storm starting to move out

Leave – Storm starting to move out Radar Image of Metro Atlanta from the National Weather Service. Image captured at 2:12 am, Feb. 12
Share 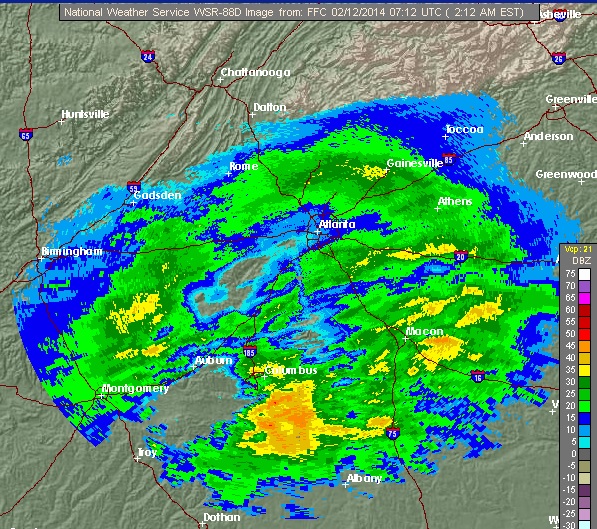 Radar Image of Metro Atlanta from the National Weather Service. Image captured at 2:12 am, Feb. 12

After three days trapped in a cold, kids-home-from-school-and-driving-their-parents-up-the-wall hell, this winter storm nonsense is starting to get on out of here.

According to the National Weather Service the forecast for the day is mostly sunny, with a high near 45. Tonight will be mostly clear, with a low around 30.

“The same storm that brought heavy snows and significant ice accumulations to portions of the Southeast on Wednesday will begin its track up the Eastern Seaboard on Thursday,” NWS says. “An abundance of Atlantic moisture getting wrapped into the storm will continue to fuel widespread precipitation …which should lift through the Mid-Atlantic States and Northeast Thursday into Friday.”

There’s a chance of some rain tomorrow, but it looks like the evil wizard’s spell of never-ending cold has finally worn off now that the prophecy has been fulfilled. That sun will have its work cut out for it, melting most of the snow off these roads and making driving conditions pretty lousy.

Decaturish.com will keep you updated on whether schools, government offices and other signs of structured civilization will return to their normal routines tomorrow.