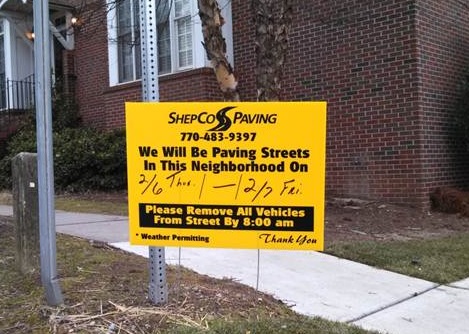 Photo provided by the City of Decatur.

The city of Decatur reports that paving of East Maple street in Decatur will begin Thursday, Feb. 6, weather permitting.

“Reeves Contracting will finish paving East Maple Street on Thursday. No on-street parking will be permitted on East Maple during paving,” the city announced via email.

The paving is part of ongoing downtown Decatur storm drain improvements. Cars need to be removed from East Maple by 8 am, the city announced.

Earlier this week, the contractor began installation of a new storm sewer on Church Street just north of East Maple, according to the city’s Decatur Minute blog.