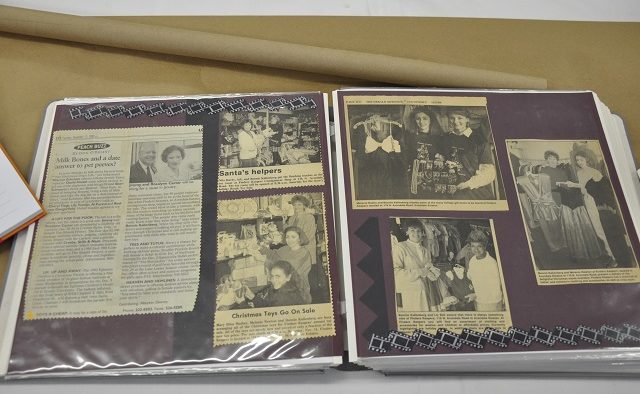 A scrapbook inside Finders Keepers Fashions in Avondale Estates. The business recently celebrated its 30th anniversary. Photo by Dan Whisenhunt

Bonnie Kallenberg has seen Avondale Estates’ ups and downs during her 30 years doing business in the city.

Kallenberg’s consignment shop, Finders Keepers, has been there through it all. The business celebrated its 30th anniversary on Feb. 24. She moved to her current location on North Avondale Road in 1995, leaving the Tudor Village just down the street.

Now that Avondale Estates is on the upswing again, and there’s a whole new kind of client walking through her doors.

“Now it’s considered part of the whole recycling trend,” she said. “It’s a lifestyle choice, to not contribute to the excess that we have.”

For the uninitiated, a consignment store is a business that sells clothes that people no longer want or need. 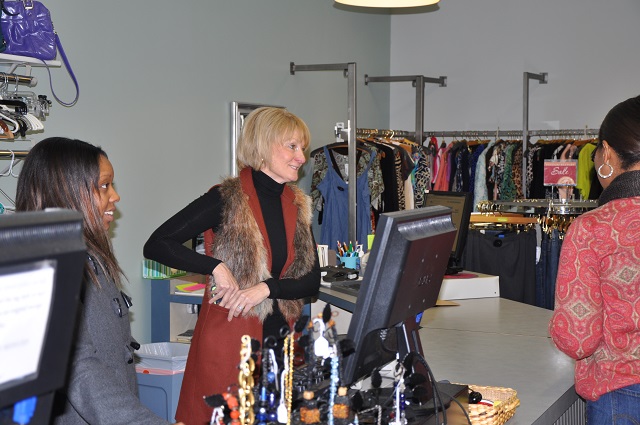 She said the consignment business started with children’s clothes, because kids grow out of them so quickly. It has moved toward maternity clothes and women’s clothes in general, she said. Now the business has evolved into selling higher end products. Kallenberg also operates three other stores located in Avondale Estates and Decatur, selling men’s clothes, furnishings and designer fashions. She employs 25 people total, she said.

“It’s great,” she said. “We’ve always had a lot of support from the community. We’re well located for the lunch runs, and the after work runs.”

She’s lived in the city since 1981 and is also vice president of the local business association.

She said the area was “a lot more vibrant” before the recession hit a few years ago. Some of the businesses around her that generated foot traffic, like local cafes, closed down.

“There was no synergy here,” she said.

Kallenberg said the store has noticed the pace pick up thanks to new businesses opening in the Tudor Village area. She expects that to ramp up as more companies start moving into vacant spaces downtown.

“Anything that’s coming in, I’m ecstatic about,” she said. “We have a lot of destination shoppers.”

Caitlin Bradfield has been employed by the store for a year and a half. She said the job is interesting because she always sees one-of-a-kind garments.

She said it’s “a lot of different things from a lot of eras.” Caitlin Bradfield , an employee of Finders Keepers in Avondale Estates, examines the clothes on the store’s racks. Photo by: Dan Whisenhunt