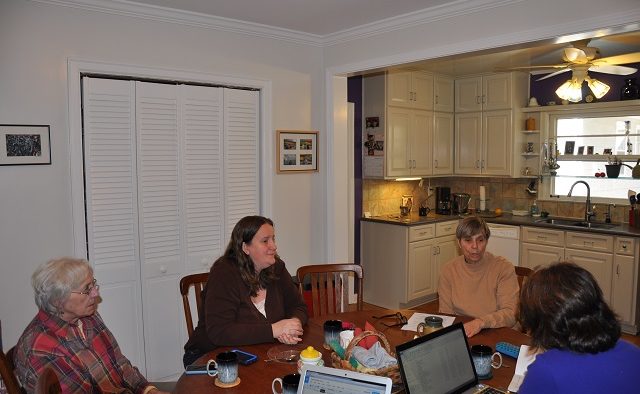 From left to right, Catherine Carter, Amanda Davis , Annie Archbold and Catherine Fox sit down on Feb. 9 to talk about how to move forward with promoting tree protection in the city of Decatur, GA.
Share 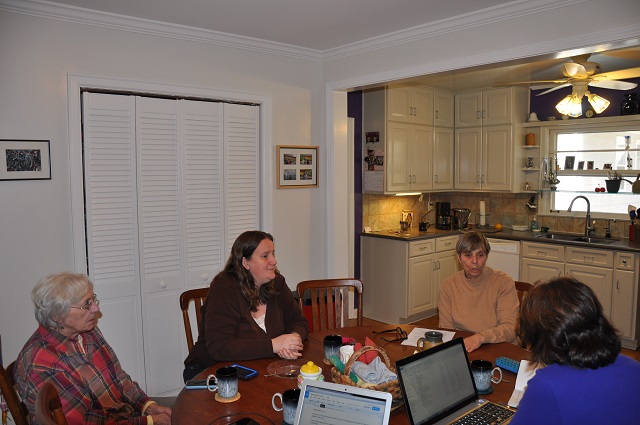 From left to right, Catherine Carter, Amanda Davis, Annie Archbold and Catherine Fox sit down on Feb. 9 to talk about how to move forward with promoting tree protection in the city of Decatur, GA.

On Sunday, four women sat around Annie Archbold’s kitchen table at her Sycamore Drive home in Decatur and talked about the future of the city’s trees.

Archbold, Catherine Fox, Catherine Carter and Amanda Davis drank coffee together for an hour while they brainstormed.

Fox looked for ways to lower her profile in the debate about how to protect and increase the city’s tree cover.

“I’m a lightning rod and it’s not working,” Fox said. 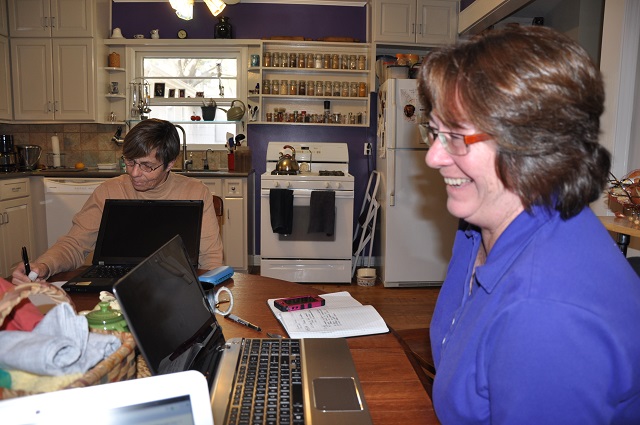 Catherine Fox, leader of Trees Decatur, shares a lighthearted moment during a Feb. 9 meeting about improving the city of Decatur’s tree ordinance.

Fox owns an environmental consulting firm and is leader of Trees Decatur, a group that submitted a 700-signature petition to the city of Decatur in September asking for stricter laws regulating tree removal. It kicked off a months-long process that culminated in a contentious Jan. 21 City Commission meeting.

Commissioners stung the petitioners when they voted to table the proposed tree ordinance for “tweaks” after numerous residents spoke out against it. It was going to be considered again in March, but commissioners have delayed that vote, too.

Fox said during the Jan. 21 commission meeting that the proposed ordinance wasn’t perfect but still better than the city’s current one. A few days later, on Jan. 26, Fox attended a meeting organized by residents who had concerns about the new ordinance. One of the residents there placed the blame for the controversy on Fox, and the two sniped at each other for a moment until the meeting organizers intervened.

The residents of that meeting ultimately launched their own petition drive urging commissioners to completely rewrite the proposed regulations.

Fox said Trees Decatur pushed for the changes, but didn’t have a hand in crafting the ordinance the commission ultimately tabled. That was done by city staff and a consultant, Technical Forestry Services, for $7,700.

“We had the goals. We had the saber rattling. We had 800 supporters,” Fox said. “The city is the one that wrote the ordinance.”

Carter said the Trees Decatur needs to find a way to distance itself from the controversial policy.

“They’re associating us with hundreds of thousands of dollars with penalties,” Carter said.

In recent days the Trees Decatur group has stepped up its messaging efforts. It launched a new website. It expressed an interest in joining the Arbor Day celebration planned by Chad Stogner, a property owner who spoke at the Jan. 26 meeting.

Fox said she’s willing to find compromises and make the ordinance better. But will the commissioners be willing to try it again?

“Our goal really is to get the city to adopt a stronger ordinance,” Fox said. “I have no idea if they will now. They’ve been shell shocked.”