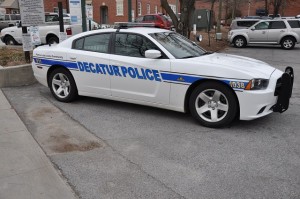 Decatur Police said a 14-year-old boy was robbed while walking down McKoy Street in Oakhurst on Feb. 14

“The 14-year-old victim reported he was walking to a store in Oakhurst Village at approximately 11 pm,” Ross said. “The victim stated while he was walking on McKoy Street at West Hill Street and looking down at his cell phone. The suspect approached him from behind and reached around and grabbed his hands. The victim struggled with the suspect and dropped his phone on the ground. The suspect grabbed $20 the victim had been holding with his phone and ran southbound on McKoy Street. The phone was not taken.”

The suspect was described as a black man in his 30s, about 6 feet high with a medium build, wearing a black hoodie with white lettering across the front and dark colored sweat pants. The suspect didn’t use a weapon or say that he had one. The boy was non injured.

Editor’s note: An earlier version of this article incorrectly identified the location of the robbery. Police responded to a call of a robbery at the 100 block of McKoy Street, but the robbery happened at McKoy Street at West Hill.