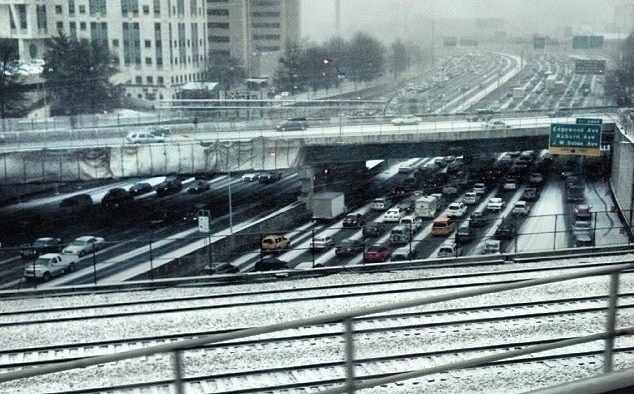 A photo my friend Catie took from a MARTA train while passing the downtown connector on Jan. 28.
Share 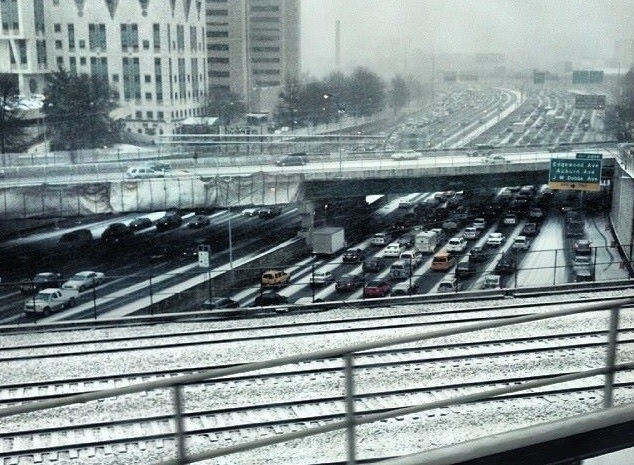 A photo my friend Catie took from a MARTA train while passing the downtown connector on Jan. 28.

When the Jan. 28 snowstorm hit, many commuters were stuck in traffic for hours, trapped inside their cars on metro Atlanta’s interstate system.

If only there was some way to get people out of their cars. Perhaps we could build a – what do you call it? – transit system of some kind? Actually, Atlanta has one of those. It’s called MARTA. People who used it on Jan. 28, like my friend Catie, didn’t have to spend the night at a Home Depot.

Gov. Nathan Deal has pledged a top to bottom review of how he and other officials managed screw up Atlanta’s response to 2 inches of snow accumulating on the ground. A reporter from Georgia Public Broadcasting asked Deal if he thought building more of that transit stuff would make the roads less congested when that snow stuff starts falling from the sky.

According to GPB, Deal said that wouldn’t have changed anything:

“I know there are those who would suggest that this is an excellent example of why we need more mass transit. Maybe it is a signal that people would consider that. But the reality is, it would not have caused us to have fewer single occupants in vehicles on the day in question when this happened last week.“

The governor concluded the whole transit thing is “a good talking point.”

“Those who would suggest” that having more transit to get people off the roads would be an effective way of getting people off the roads just don’t know Atlantans. We actually hate our families and love the rugged comfort of sleeping atop a pile of cardboard boxes on the floor of a hardware store.

Oh, you silly mass transit people, with your fancy ideas and talking points backed up by reality and whatnot. Will you ever learn?