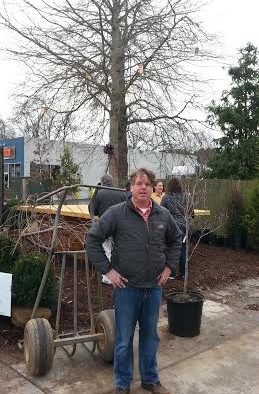 On Friday, Feb. 21, Decatur Mayor Jim Baskett received a Willow Oak, a gift from a sponsor of the Decatur Arbor Day Festival.

The city received the tree Friday morning, between the Marlay and Farm Burger. Chad Stogner, a property owner in Decatur, said “This is probably the largest tree ever to be planted in the city – as it is over 30 feet tall.”

The ceremony kicks off a weeks-long Arbor Day celebration in the city. It’s a festival organized by people who were critics of the city’s attempt to pass new regulations on tree planting and removal.

According to festival planners, “Samples of trees and experts who can help you select will be at The Gate Called Beautiful next to The Marlay on Feb 21, 22, and 23 to kick off the ordering period which lasts through March 2. After the 23, order forms can be dropped off at participating local sponsors.” Decatur will hold a weekend-long National Arbor Day celebration on April 25, 26 and 27.

Chris Billingsley sent along this photo of Stogner standing in front of the donated tree. 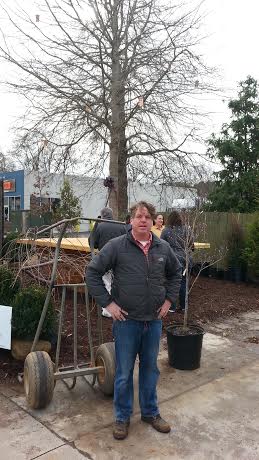