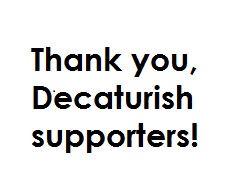 At the beginning of January, I made my official fundraising push to cover startup expenses. I admit I set the bar a little high, but you don’t know if you don’t ask, right?

I’m proud to report that I still pulled in a record number of donations, $715.

With that money, I’ve been able to acquire a business license, pay legal expenses, buy a new host, buy the WordPress Theme that became the basis of the new website, buy some marketing materials and pay for a couple of business lunches.

I’ve still got about roughly $120 left over, which is good considering I’ll have some expenses in the near future, like hosting fees, etc.

It was my hope to establish a model where I could also discuss ad revenues. However, ad salesmen wanted no part of that idea. It’s just one of the many facts of life that I’m learning as I continue to work on growing this company. So in the future, all transparency reports will be confined to what I take in with donations (button is on the right-hand side of the screen at the very bottom, by the way). This will at least provide a level of accountability that would be expected of a charity accepting donations.

It’s fair. I can live with it. Hopefully, I won’t depend on donations as much as I have. That’s the goal.

To all of my supporters and readers: none of this would be possible without you. Thank you.