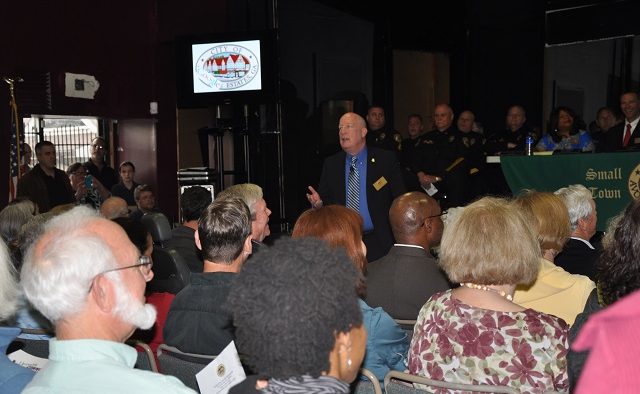 Avondale Estates Mayor Ed Rieker delivers his State of the City Speech at the Towne Cinema building on March 24, 2014.
Share 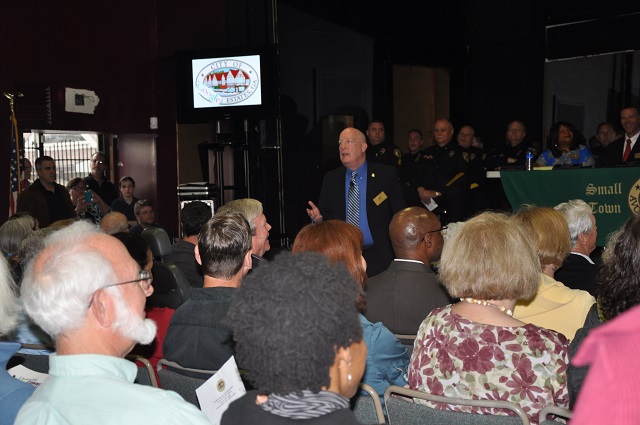 Avondale Estates Mayor Ed Rieker delivers his State of the City Speech at the Towne Cinema building on March 24, 2014.

Mayor Ed Rieker spoke to residents on March 24 and told them about where Avondale Estates has been, where it is now and where he wants it to go.

Rieker delivered his “State of the City” address packed house at the Towne Cinema, a long-shuttered movie theater in the Tudor Village building. It was an appropriate venue for the topic of the speech. It was constructed in 1925, around the time the city was founded. It has housed several businesses over the years, but in more recent history it has remained vacant.

Now the building’s new owner, Oakhurst Realty Partners, is looking for a tenant that will make the empty space a thriving part of the city’s future.

Rieker gave the company a shout out during his speech.

“They saw something in Avondale that other development companies didn’t see,” Rieker said. “They took a risk on this building and now they’re investing.”

Investing has become a trend lately in Avondale Estates, a city of about 3,000 people modeled after Stratford-upon-Avon because the founder, George Willis, thought it looked cool.

Over the years the Tudor style architecture has been applied inconsistently, leaving a haphazard collection of different looking-buildings along the city’s main road, US 278.

City Commissioners recently adopted an update to the city’s downtown master plan that will attempt to address some of the aesthetic noise and create a more harmonious look for the city.

Rieker also updated the audience on some of the behind-the-scenes things that the city did to make itself more appealing to businesses like the Pallookaville restaurant.

The mayor said the city decided to do its own permitting and inspections so owners wouldn’t have to deal with DeKalb County’s tedious bureaucracy.

Rieker said business owners get quicker service now, “instead of going to DeKalb County and picking a number and waiting for three or four hours.”

The city also recently acquired property that was part of a failed development deal, Rieker said. The city announced in January that it purchased 4.09 acres located along Oak Street, Franklin Street and North Avondale Road for $1 million. The mayor also said the city wants to buy the old Avondale High School property.

He said the city has tried to purchase the property from the county, but the discussions haven’t gone anywhere. Rieker said the city will keep trying.

“We’re going to press a little harder,” he said. “I’m going to need you to press for me so we can talk about getting this facility.”

The mayor encouraged the audience to rally around the city and its goals.

“We’re truly in this together,” he said. “We need each other to get this done.”

After the speech, the audience walked across the parking lot behind the Towne Cinema to the roomier Market Events building.

Winnie Hulme said the development in the city’s downtown is bringing people to the city who’ve never heard of Avondale Estates before.

“I think there’s a lot of exciting things happening in the city,” she said.

“I like the way he tied the old in with the new,” Reimer said.