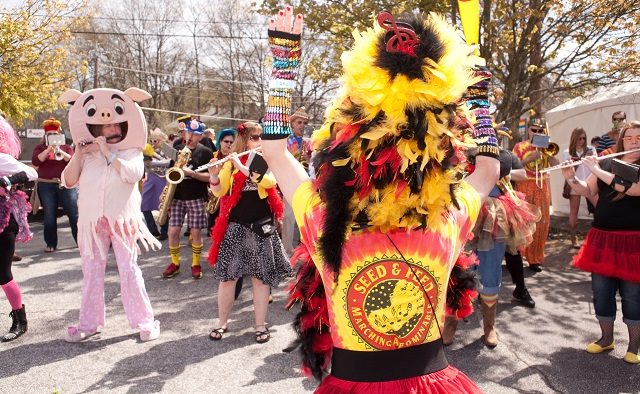 Scenes from BaconFest 2013. What wonders will we behold at BaconFest this year? Photo courtesy of BaconFest
Share 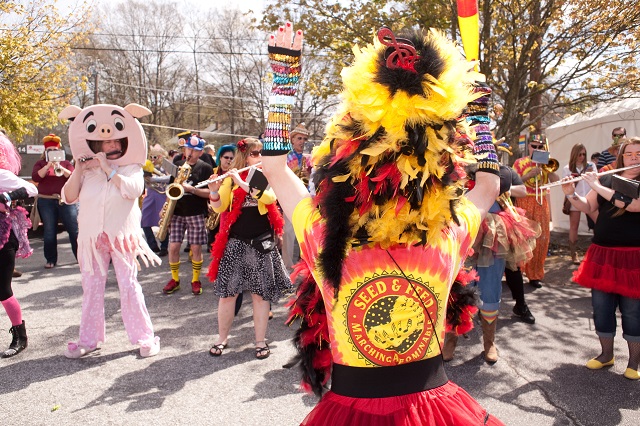 Scenes from BaconFest 2013. What wonders will we behold at BaconFest this year? Photo courtesy of BaconFest

BaconFest is all about the three B’s: beer, bands and, of course, bacon.

The 14th annual BaconFest, a fundraiser for local improv theatre Dad’s Garage,  returns March 29 and will be held at the Masquerade Music Park from 1-6pm.

“BaconFest is the happiest day of the year!” said Sarah Ackerman, the volunteer coordinator for the festival. “There’s bacon—the best food in the world, beer—the best beverage in the world, and live bands—the best kind of music in the world.”

With the Dad’s Garage team at the helm, Ackerman said, “you know it’s going to get weird and fun in the best way possible.”

This year’s BaconFest will the the largest yet, serving up 2,250 pounds of bacon, courtesy of the Vortex. Along with the food, drink, and music, attendees can enjoy carnival games invented by Dad’s Garage improvisors and a silent auction. Tickets start at $27 and can be purchased online. The festival is expected to sell out beforehand, as it has in previous years, so interested attendees are advised to buy tickets sooner rather than later.

BaconFest sells tickets based on the amount of PBR and pork that the ticket holder wishes to consume. The Portioned Porking tickets ($27) grant admission to the festival, five tickets to the carnival booths, and three cups of PBR, bacon, or a split between the two. The Bottomless Bacon ticket level ($47) allows for admission to the festival, unlimited games, and an endless supply of PBR and pig. Dedicated theatre patrons—or folks who just really love pork—can go Whole Hog for $87, which grants access to non-bacon BBQ from Bone Lick, along with access to some fancier kegs of beer.

Along with bacon and beer, the festival promises some sweet items up for grabs at its silent auction. Chad Shearer, the spokesman for the festival, said that the silent auction goods this year include a pair of round-trip Delta tickets to anywhere in the continental US, dinner for 10 at Gunshow (Kevin Gillespie’s latest restaurant), and donations from Cartoon Network, FX’s Archer, Batdorf & Bronson Coffee Roasters, Muss & Turners, Atlantic Station, and more.

For first time visitors, Shearer had a word of advice. “Pace yourself,” he said. “Get ready to get a little ridiculous and funky.”

Interested in attending BaconFest for free? The festival still needs volunteers. Those interested in helping out with the proceedings can sign up to volunteer for the festival at this link until March 21st, and gain free entry to the festival along with a t-shirt.