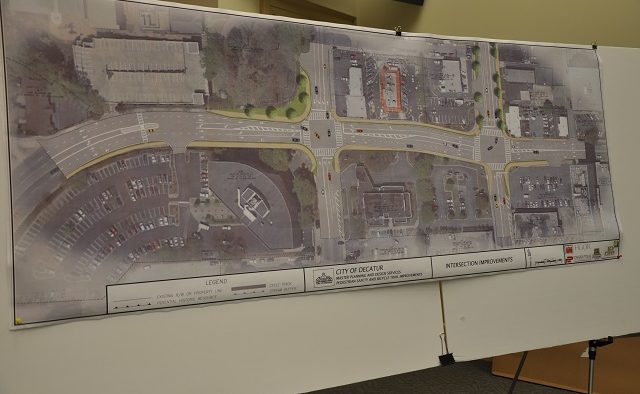 An artist's rendering of proposed changes to the intersections of Commerce Drive with Church Street and Clairemont Avenue. Photo by Dan Whisenhunt
Share 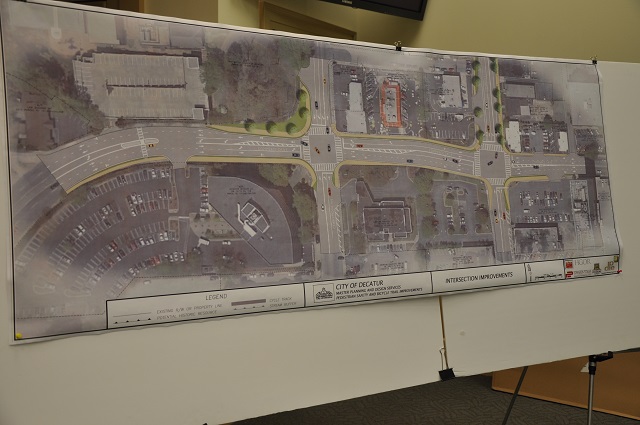 An artist’s rendering of proposed changes to the intersections of Commerce Drive with Church Street and Clairemont Avenue. Photo by Dan Whisenhunt

When planners invite the public out to critique a plan for road work, it usually goes one of two ways: praise or pitchforks.

So what did Decatur residents think about a plan to put Church street on a road diet, narrowing it to two-lanes all the way up to the city limits?

The ones that attended the March 19 meeting said they liked what they saw, for the most part. Chris Billingsley attended as well, and left a comment on a previous article offering a lengthy critique of the plan. You can read his comment by clicking here and scrolling to the end of the article.

Decaturish.com dropped by the meeting, stopping first at city hall’s front door, finding a locked door sign that was inadvertently turned upside down telling residents to go through the back entrance. A handful of them were inside the city commission’s meeting room, looking at the giant poster-boards showing how Decatur intends to revamp the Commerce Drive’s intersections with Clairemont Avenue and Church Street.

Todd Fuller, a project manager with consultant HGOR, walked a reporter through the concept. Under the current plan, there would be bike lanes on Church Street elevated to curb level. There would also be a sidewalk running parallel. The pedestrians and cyclists would be separated by – and people who live in Decatur are going to love this – trees! Fuller said the plan calls for planting a couple of hundred trees along Church Street.

The intersections of Commerce Drive at Church and Clairemont would lose their dedicated turn lanes, meaning drivers would have to stop before making a turn, giving pedestrians a little more leeway.

The improvements to Church and Clairemont have been talked about for a few years. Not included in the current plan is a proposed roundabout at the intersection of Church Street, Medlock Road and Forkner Drive.

Jimmy Garrison, with Development, Planning and Engineering Inc., said the roundabout would’ve increased the costs of buying up right of way and clearances needed to move forward.

“The goal is to get it in the ground as quick as you can,” he said of the project.

In this case “as quick as you can” is about two years away, he said. The improvements are expected to cost $4 million, funded with transportation grants.

Michael Harbin said he hated to see the roundabout removed from the project.

“I hope it will happen in the future,” he said. “I just like to make things look more walkable.”

Sara Yourman rode her bike to the input session.

When asked what she thought about the latest version of the plan, she said, “It makes me really happy. I think the Commerce street stuff is a compromise. I understand that.”

Decatur’s consultants and planners met with the generally happy, understanding public for about 90 minutes before collecting their comment cards and calling it a night.