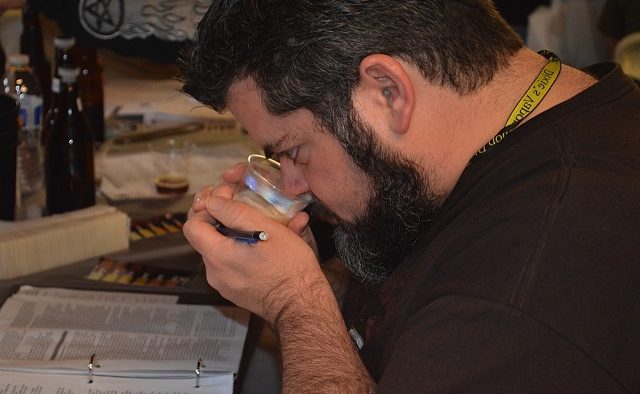 March 29, 2014: A judge at the Peach State Brew Off sniffing aroma of Imperial IPA. File Photo by Lauren Ragland
Share 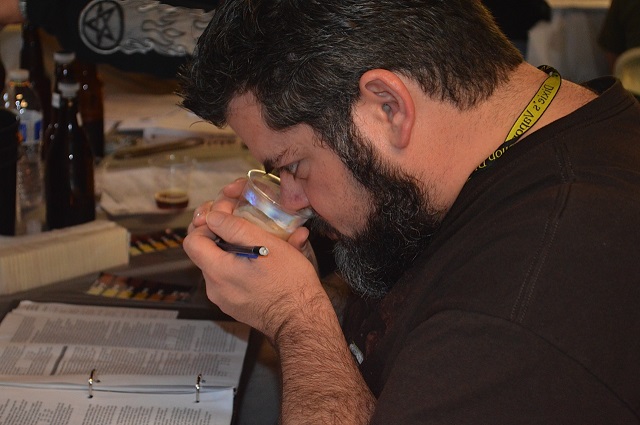 A judge at the Peach State Brew Off sniffing aroma of Imperial IPA. Photo by: Lauren Ragland

Avondale Estates has a fondness for beer and recently played host to the metro area’s first legal homebrew competition.

“Avondale is leading the way and pushing through the permit process for home brewers,” said Clint Paden, organizer for the Peach State Brew Off.

On Saturday, March 29, one of the Southeast’s oldest and largest home brew competitions took place legally for the first time. The Covert Hops Society hosts the Peach State Brew Off. In operation for 21 years, this competition has served to examine and honor good brews from across the country.

This year, the number of contestants grew. One hundred and fifty-one home brewers submitted 320 beers, ciders and meads. There were 31 categories ranging from triple IPAs to sours and bocks, one best of show for beer and one for cider or mead.

The competition was open to anyone who brews. Prior to this past January, the Brew Off did not have a home. Though home brew laws have recently changed in Georgia, giving cities the ability to license these competitions, cities in the metro Atlanta area were slow to put this matter on their dockets. Avondale Estates was among the first.

Paden said, “Avondale is easy to work with. It’s filled with friendly people who want cool things to happen here.”

The judging took place in a building behind the city’s Tudor Village. It’s an area that’s quickly becoming a launch pad for creative, artisanal businesses. The site of the Brew Off is an event space that will hold art shows and concerts. Next door, there will be a whiskey distillery and a small-batch vinegar maker. A concert venue is scheduled to replace a parking lot nearby.

The quality of home brew appears to have risen as the laws have changed. Judge Kimberly Charles said, “The beers this year are better. They’re higher quality. Overall the contest is more competitive and we’re giving higher scores.”

Paden attributes the better beer to greater access to ingredients and information. The brewers know more about getting the process, the temperatures, and fermentation right. He said, “Anyone can really get into it if they’re careful and take advice from someone who has been doing it a while.”