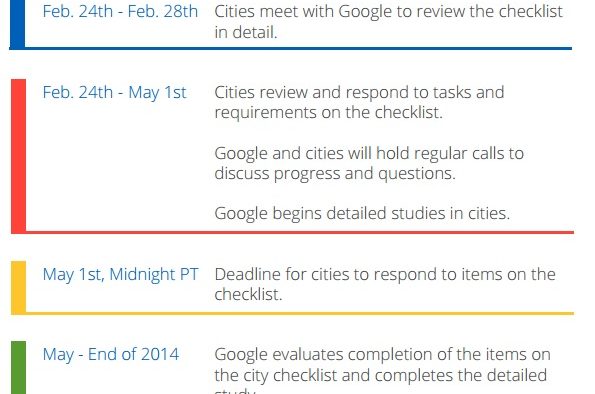 Here is Google's timeline for getting information that will help the company decide whether to bring its fiber services to our area. Source: Dslreports.com
Share

Google will be calling a lot of shots if cities want their high speed fiber service, according to the company’s checklist.

The checklist, published by Dslreports.com, shows that one of Google’s long-term goals include expanding its Wi – Fi service to Google Fiber cities.

“Google Fiber is also exploring the possibility of deploying Wi-Fi in future Google Fiber cities,” the document says. “Requirements related to Wi-Fi are not included in this checklist, but we will be discussing our Wi-Fi plans and related requirements with your city as we move forward with your city during this planning process.”

Here are some of the checklist’s highlights:

– Google’s deadline for answers to its questions is midnight, May 1. Google will have from May 1 to the end of 2014 to determine whether the cities that made the short list will receive Google Fiber.

– Google wants lots of data about infrastructure and permitting processes. The company has specific expectations for what kind of permitting process it expects to encounter when working with local governments. The checklist says, “If your city’s current practices do differ, please explain why and outline ideas to accommodate a large network build with accelerated timelines.”

– Google expects permitting processes to be speedy. “We are looking for a response within ten (10) days of submitting the permit application,” the checklist says.

– Google wants detailed information about city zoning and regulations, including – and Decatur residents, take note – the city’s rules on working around trees. City Commissioners on March 3 held a work session to discuss revisions to the city’s tree ordinance. There will be a draft ready by April 7 and commissioners expect to adopt it by May 19. Also, the city is undergoing a rewrite of its zoning codes to create a Unified Development Ordinance, and that draft won’t be ready until September 2014.

“While the press generally misread the announcement as saying that these cities would be getting Google Fiber, it seems like only one or two actually will by the time this new initiative is over,” the website reported.

It’s an interesting take on the topic, and worth a read. To read the article, click here. 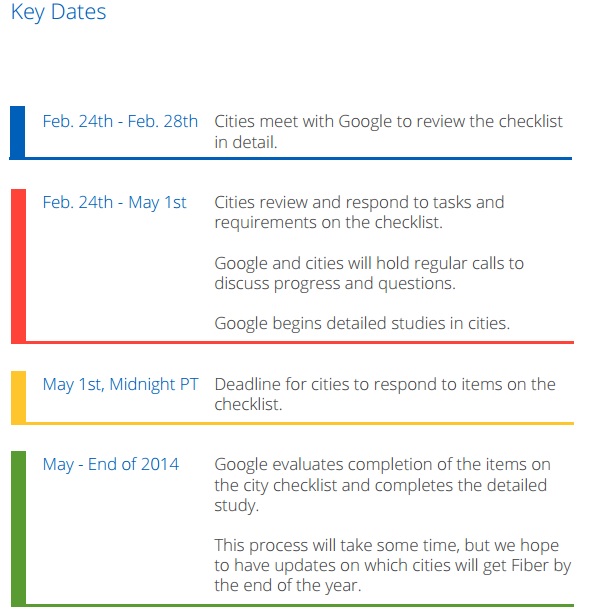 Here is Google’s timeline for getting information that will help the company decide whether to bring its fiber services to our area. Source: Dslreports.com