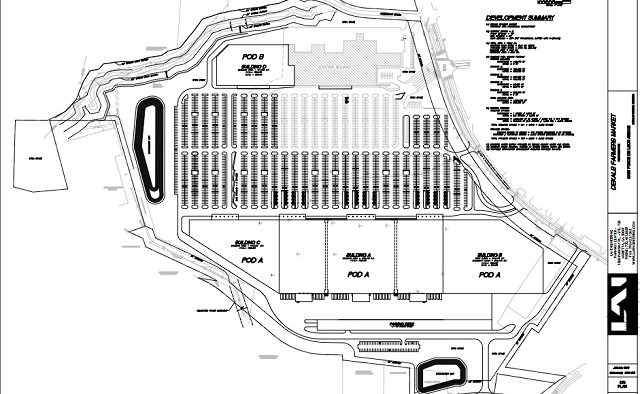 A site plan for the DeKalb Farmers Market, obtained from the city of Avondale Estates.
Share 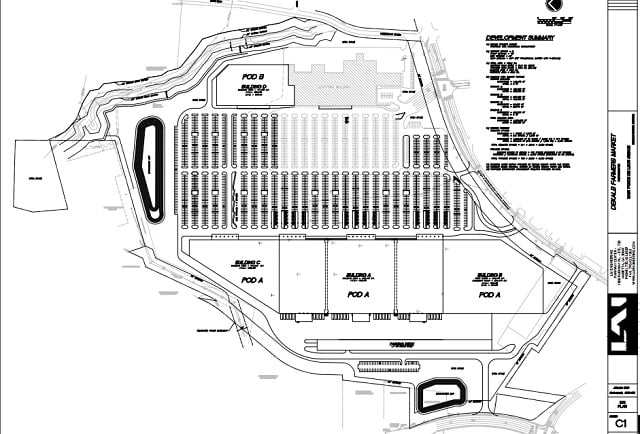 A site plan for the DeKalb Farmers Market, obtained from the city of Avondale Estates.

Recently shoppers at the DeKalb Farmers Market have noticed construction crews moving around on parcels adjacent to the store.

The planned expansion appears to be underway. When everything is done, there will be more than a million square feet of additional space, 2,800 more parking spaces and two new driveways: one on Ponce De Leon and one on DeKalb Industrial Way.

DFM’s expansion is so large it had to be vetted as a Development of Regional Impact by the Atlanta Regional Commission.

Owner Robert Blazer, who is notoriously media shy, has not returned a message seeking comment. A woman who answered his phone said the project is on a three to five year timetable, but wasn’t clear if she meant the first phase of the project or the whole expansion. Previous news reports have said the expansion will take about 10 years and occur in four phases.

According to the DRI report:

The woman who answered the phone said DFM is “Making it larger because we’ve kind of outgrown this building.” Site plans obtained from the city of Avondale Estates Website show the existing building would be expanded by more than 100,000 square feet. The additional space will be a combination of warehouse and retail, according to the old plans, and would eventually create a separate wholesale operation and give the retail space some additional breathing room.

Expansion of the Farmers Market will create thousands of new trips each day, according to the DRI report, and the report recommends several intersection improvements, like optimizing signal timing.

“Based on the traffic analysis completed by LAI Engineering, the transportation system will require multiple intersection improvements, particularly in later phases of the development,” the DRI report says. “ARC recommends continued coordination DeKalb County to ensure these improvements are made.