This Google Earth image shows the location of a proposed development of two single family homes across from the East Lake MARTA station.
Share 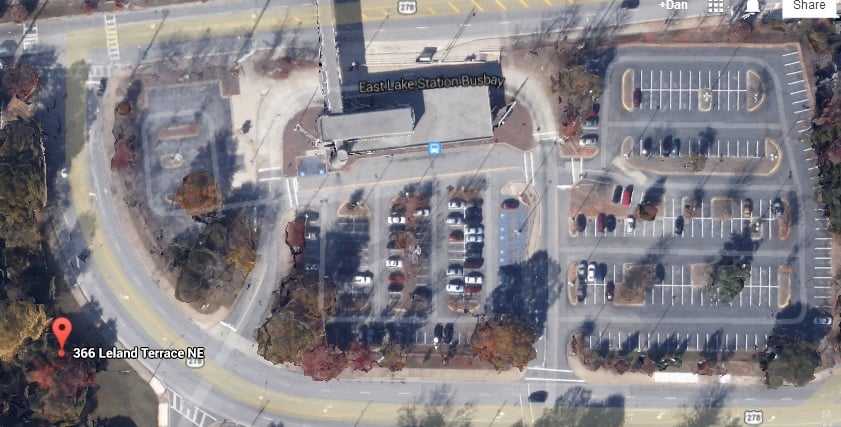 This Google Earth image shows the location of a proposed development of two single family homes across from the East Lake MARTA station.

A builder who wants to construct two single family homes at the corner of Park Place and Leland Terrace said he’s confident he can work through potential issues with neighboring property owners.

The property is across from the East Lake MARTA station.

Tad Braswell’s application to subdivide the property was on the agenda for the Feb. 25 Neighborhood Planning Unit – O meeting, but was deferred so he could continue talking with residents.

Braswell, with Chamblee-based TerraCraft Homes, said the houses he plans to build would be between 2,300 and 2,500 square feet and would be priced in the high $300,000’s to $400,000. The price point shows just how much things have changed in Kirkwood in the last few years. There were plans in 2004 to develop three single family homes on the same property with a projected sale price of $250,000. Those plans never came to fruition, but Braswell said he’s ready to move forward.

The 2004 plans called for two-story houses, which was a concern for neighbors because the property is on a higher elevation. Braswell said he doesn’t intend to build a two story home, saying he’d prefer building a home that’s closer to a story and a half.

“We’re trying to design it so we can keep from towering over (the neighbors),” he said. “I can’t commit to any design until we get the final lot subdivided.”

Braswell said the neighbors have asked him to put up a performance bond to ensure he’ll follow through with his plans. He said he can’t agree to that.

“I’ve never had to do that,” he said. “Hopefully we can work through that.”

MARTA officials discussed plans to redevelop the area around the station. Earl Williamson, the former NPU-O chairman, suspects the developers were holding off to see if MARTA would follow through.

Braswell said he thinks MARTA will redevelop the property at some point, but will need to rethink the current parking situation.

“The way it’s designed, having parking on both sides of the track, doesn’t make any sense,” he said. “You could take one out, put a parking deck up and build a cool development on the other side.”