Briarcliff claims to have found a copy of the map. Here it is (Map commentary added by Briarcliff supporters, not Decaturish.com): 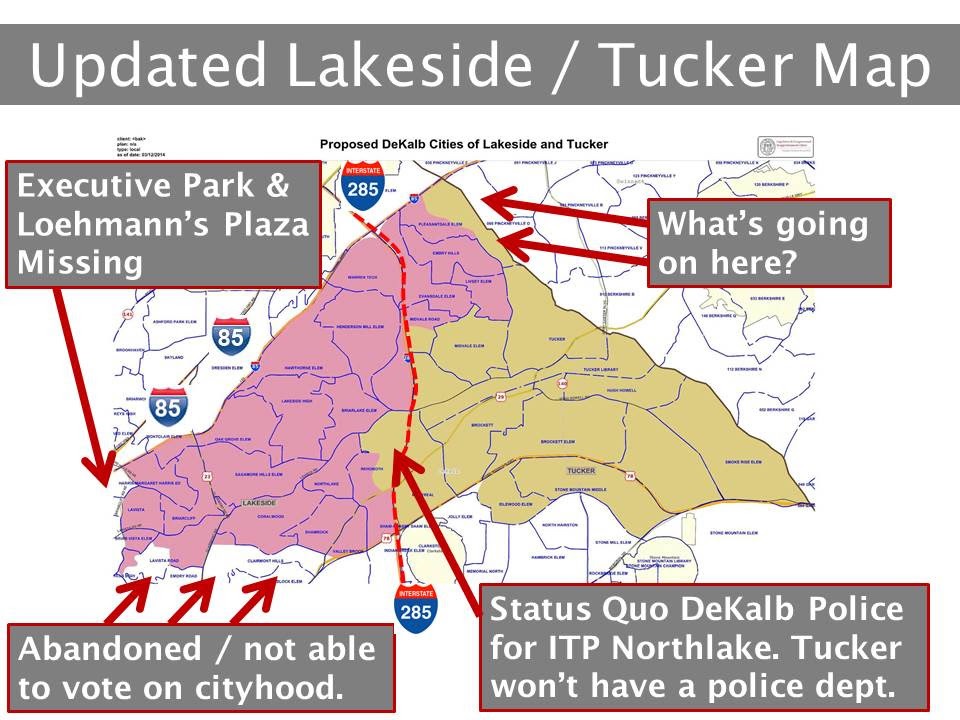 Here is the story we published this morning.

If the push to create new cities in DeKalb this year isn’t successful, it will at least be remembered for its creative lobbying efforts.

There are three proposals for new cities. Lakeside, Tucker and Briarcliff all want to be on the May 20 ballot. The borders of the cities overlap, meaning that one could probably not exist if the other succeeds.

Lakeside’s prospects took a turn for the worse this week. WABE reports that a House committee tabled the Lakeside bill. According to Reporter Newspapers, the cities of Tucker and Lakeside have worked out a compromise that will allow the two cities to move forward.

All of this has Briarcliff supporters asking, “Where’s the map?”

Briarcliff supporters said in an email today that Lakeside hasn’t published a copy of the map reflecting its deal with Tucker supporters. Briarcliff claims that Lakeside is ceding the contested Northlake Mall area to Tucker.

“This is not transparency,” the email from Briarcliff Initiative says. “This is what makes people cynical of government. Cityhood is a major event that impacts tens of thousands of people.”

The email also contained this image: 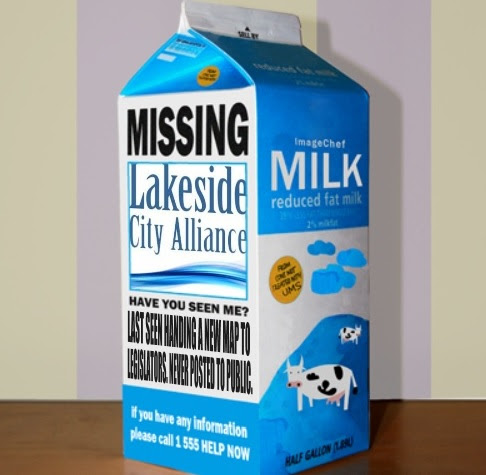 Lakeside took to its Facebook page today to tell its supporters that a map would be forthcoming. Here’s the letter from Lakeside City Alliance chairwoman Mary Kay Woodworth:

We apologize that there has been no detail provided regarding the action yesterday at the House Governmental Affairs Committee meeting. Currently, we are waiting for a viewable copy of the compromise map; when received we will post on our Facebook page and our website.

Senator Millar made it very clear to us that because of political forces at work behind the scenes, the only way to move our bill forward was to reach this compromise with Tucker – remove part of the Midvale voting precinct and the Pleasantdale voting precinct. as well as the retail and commercial area south of Lavista Road (including Northlake Festival and Best Buy shopping center and industrial on Montreal Road).

If this was not agreed to, the ENTIRE Northlake commercial, retail, industrial area AND all property outside of the perimeter would be removed from our map and given to Tucker.

While neither Lakeside or Tucker was satisfied with this, we agreed in order to move the bill forward. This was a very difficult decision and we knew that it would disappoint a great number of loyal supporters and friends.

Yesterday, as previously reported, Representative Meadows apparently did not like this agreement, and he motioned to table SB 270.

Once again, we are obviously disappointed that the bill was not voted out of committee today, but remain optimistic that the legislation can be revived and passed before the end of session.

Don’t forget, the one thing that is true in politics is that is not over until the gavel bangs.

Thank you for your continued support.