Scott Stroud, retail manager at The Spotted Trotter Charcuterie, is always happy to meet the meat needs of any customers who walk through his doors.

“We can pretty much get you everything from a quail to a steer,” he said between filling orders at his Kirkwood shop or March 12.

He said one customer wanted Kangaroo meat for an Australian rules football party, so he found the closest provider – an American farm specializing in the stuff – and placed an order.

There aren’t many places in Atlanta where you can get kangaroo meat. Stroud doesn’t typically fill such exotic requests. He spends the majority of his time dealing with the standard pigs, chickens and cows, locally sourcing as much as he can.

“One of the benefits of doing it the way we do is we know our providers,” he said. “We know our farmers. We know how they raise their animals.”

That eco-consciousness has always been important to the business, Stroud said, and it’s helped draw in customers. The Spotted Trotter Charcuterie expanded in late February, doubling their curing space to about 300 square feet. By July, they plan to open a second location and full-service restaurant in the Krog Street Market.

Stroud expects opening the restaurant will help the business get a bit more adventurous with its offerings. If something isn’t selling at the shop, they’ll be able to try it out on the restaurant menu in an attempt to generate interest there.

“Business has been really good here, but we’re a destination,” Stroud said. “Over there, there’s going to be two other full-service restaurants. It should be good for everybody. We can all feed off of one another.”

A charcuterie regularly offering 30 to 40 sausage varaites, 15 to 20 salami options and a variety of other specialty and custom-cut meats.

“I don’t eat meat very often,” she said as the butcher cut her steak. “When I do, I like to make sure it’s happy meat.”

The shop regularly stocks 30 to 40 varieties of fresh sausage, 15 to 20 types of salami, several specialty meats and cut-to-order steaks.

Right now the shop has a staff of 10, but Stroud expects to hire between 40 and 50 employees to fill openings in both the restaurant and second location.

The business started in 2010 as a one-man operation, preparing meats in a small kitchen to sell at farmers markets. By mid-2011, the business expanded to its Kirkwood location and ramped up production to become a wholesale-focused supplier.

“Once you get to a certain level of production, well, what the heck, open retail,” Stroud said.

Today, the retail space is a small, modern take on classic butcher shops. Upbeat rock and roll music plays over the speakers to entertain customers as they wait in line, gazing at the meats through an enormous glass case. 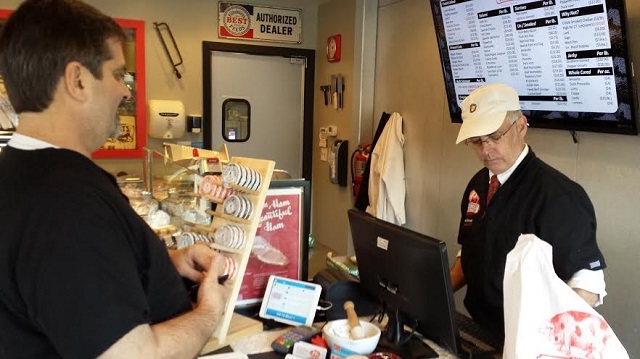 A customer places an order at The Spotted Trotter Charcuterie in Kirkwood. Photo by: Carey O’Neil

Michael Clifford has been a weekly regular at The Spotted Trotter for about a year now. The Snelleville resident’s work often brings him near the shop, but when he can’t get there during the week, he’ll make the trip into Atlanta on the weekend.

“I like food and I like talking about food,” he said while standing in line for some corned beef. “I like the quality and the selection and the uniqueness.”

One of his favorite purchases is the breakfast sausage. Clifford has traveled extensively in Europe and says the Spotted Trotter’s version of the dish reminds him of European cuisine.

“My son-in-law is from Ireland,” Clifford said. “He says it’s spot on.”