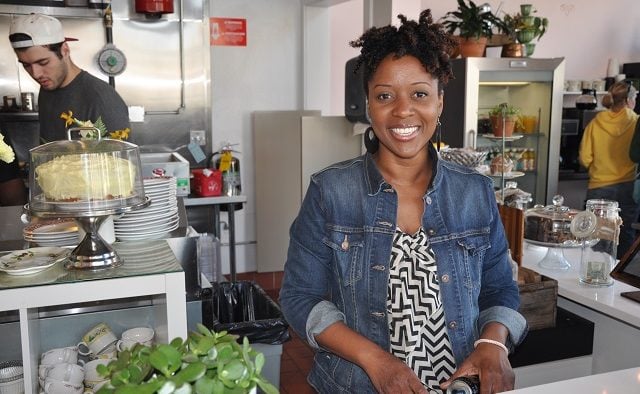 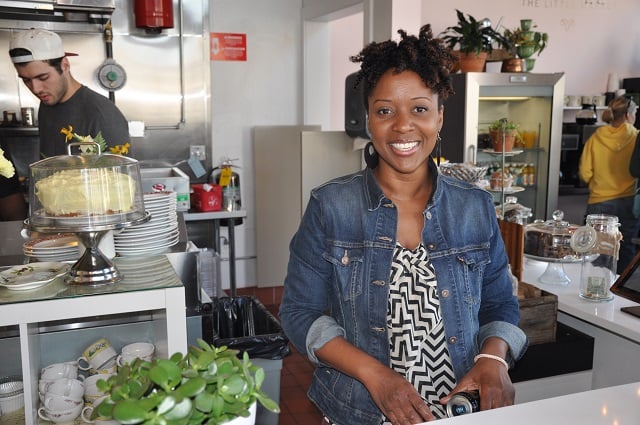 It was 9 am, March 20, and Marchet Sparks had been running errands since 6 am.

The owner of Le Petit Marche sat down at the bar in her new location and snapped open a can of Monster Energy. She spoke with a reporter, but kept a corner of her eye trained on the kitchen and on the cash register. At times she excused herself from the interview, getting behind the register or giving an assist in the kitchen.

Sparks rolls with the punches. She said her adaptability has kept her around and carried her through a recession. Her business opened in 2008 at Kirkwood Station. She opened in a larger space at 1984 Hosea Williams Drive in February. Her restaurant started as a market. From there it’s been a steady evolution to the current business, where the food is front and center and the market is an ancillary.

“In order to stay alive, I had to make changes,” she said.

Change is a recurring theme in Sparks’ story. She moved to Atlanta in 2006 from Los Angeles to be closer to her parents, Isaac and Dorothy. They work in the restaurant too, known as Mom and Pop, and she learned how to cook “at my mom’s hip.”

Sparks wasn’t a professional chef before opening a restaurant. She was a Realtor in Los Angeles for eight years, but she always wanted to try her hand at running her own market.

“I’m a builder,” she said. “I like to start from scratch and see what happens.”

She got her inspiration from touring Europe, specifically France. The decor inside her new location has a simplicity and elegance. House jazz music played through the speakers – she got up to change the music at one point because it didn’t capture the mood – and there was a large chandelier hanging from the ceiling in front of the coffee bar.

She said what few people know about her is how close she came to failure in the early years of running her business. Petit Marche opened three months before the economy tanked.

“I put my whole life savings into it,” she said. “I almost lost it all. The business was hanging by a thread.”

But being in the hospitality business means putting on a smile even when it hurts to do so. She didn’t want to let her customers know what was going on. Her food is what saved her.

“I rolled out breakfast a year after we opened. That stopped the bleeding,” Sparks said.

She said she didn’t know anything about breakfast. She made mistakes. She made grits on a hot plate. Sparks said she used her lack of knowledge to her advantage. She listened to people, her employees and her customers. She made changes. She got better.

“I remain open minded,” she said.

And that’s why her business has remained open, she said. Sparks provides 13 jobs now, and has a loyal clientele.

A reporter had the French Toast sandwich, a customer favorite, that’s a heap of butter-fried bread, eggs and bacon. 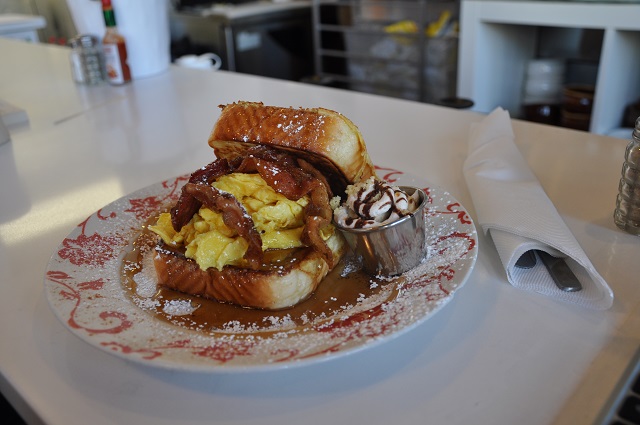 Other customer favorites include the Sunday chicken and waffles special.

Customer Marcellus Lewis worked on his computer after finishing his usual, the oatmeal and sausage.

“The environment is a friendly, community-based kind of place,” he said. “Most people here know everybody by name, and the food is good.”

Damien Gordon, another regular, loves the food and likes that the restaurant keeps things tidy.

“They pass all their health inspections on the regular,” Gordon said.

Sparks also has a catering business and rents the space out after hours for parties. But she’ll meet you somewhere, too.

“We love to bring a little slice of Petit Marche wherever we go,” she said.