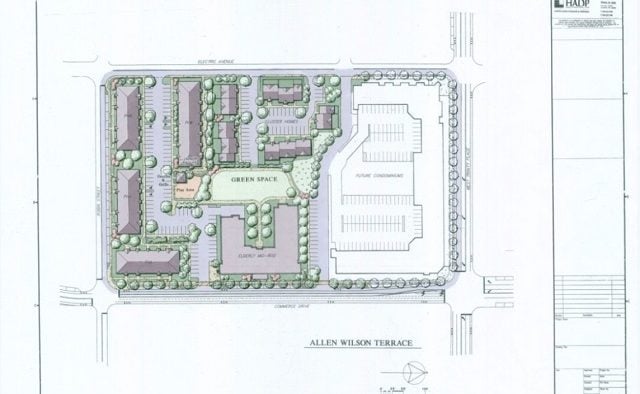 A concept drawing of condominiums that the Decatur Housing Authority intends to develop along West Trinity. Source: DHA
Share A concept drawing of condominiums that the Decatur Housing Authority intends to develop along West Trinity. Source: DHA

The Decatur Housing Authority has fenced off Allen Wilson Terrace on Commerce Drive and demolition is underway to make room for a future commercial development.

The Housing Authority is razing 55 units now, and previously demolished 144 units at the site. DHA will develop 120 to 150 units of “market-based housing” on 2.84 acres along West Trinity Place.

DHA Executive Director Doug Faust said, “There were a total of 200 units. We replaced 191.”

Faust sent a press release with additional details about the project.

“The preliminary development strategy concept includes the construction of a single U-shaped building of three to four stories fronting West Trinity Place consists of 120 to 150 units with 20 percent of the units as affordable workforce housing,” Faust wrote. “Unit distribution is likely to be one, two, and three bedroom units. The building will have frontage along Commerce Drive and Electric Avenue as shown in the concept drawing below with parking in the rear. The building will contain the amenities of other market rate housing.”

Faust added, “”It is not known at this time whether the units will be a condominium-type ownership or other structure. DHA will revisit the development approach as the financial markets continue to improve, and housing demand increases.”

He said the earliest possible start date for development would be this May once Allen Wilson is gone. He said it’s more likely that development will take place in 2015 or later.

Decatur Metro confirmed some of the details with City Manager Peggy Merriss and Planning Director Amanda Thompson. According to Decatur Metro, Merriss said the demolition will occur after Phase III occupancy along Electric Ave is completed and said that after the demolition “the DHA will market the land as a private housing development opportunity.”