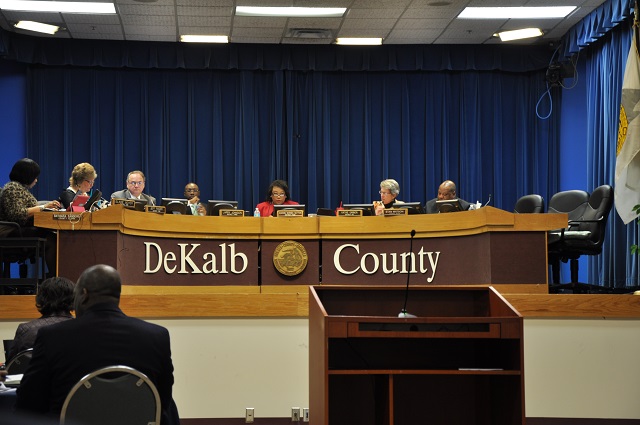 DeKalb County Commissioners have decided to try a different approach to its economic development, outsourcing to another board an attempt to strip out the politics.

The commission’s effort faces a strong headwind created by new cities that are gobbling up unincorporated areas.

Commissioners on Feb. 25 approved executing an intergovernmental agreement with The Development Authority of DeKalb County. The agreement transfers economic development activities to the board, removing them from the supervision of the county CEO.

The commission’s actions followed a scathing report produced Angelou Economics on the county’s market conditions. The report, which the county commissioned, said declining tax revenues and a culture of political corruption are holding back the county’s economic development efforts.

“The county also faces political issues relating to governance and financial oversight that reverberate into economic conditions,” the report says. “The recent indictment of the County CEO and the conviction of the former superintendent of the public school system have led to mistrust.”

Angelou Economics found the county’s tax digest has decreased 50 percent in the last six years as new cities have formed. DeKalb also suffers from a higher crime rate than its neighboring communities, including Atlanta.

The report says the IGA will help the county overcome some of its economic development challenges.

“DeKalb County is entering a new era of economic health signaled by the development of the first comprehensive economic development strategic plan, and the planned establishment of an IGA with the Development Authority to name it the official Economic Development arm for the county,” the Angelou Economics report says.

Commissioner Jeff Rader said the IGA gives the county a chance to divest itself of some of the baggage created by the county’s elected officials.

“Our prior efforts have been perceived to be politically-driven and not very effective,” Rader said. “This is an attempt to be more competitive with other jurisdictions and bring more jobs to the DeKalb tax base.”

Commissioner Sharon Barnes Sutton said the new agreement “is a vehicle for us to get better results in providing economic development for our county.”

Under the terms of the IGA, the county will provide $750,000 of the Development Authority’s $1.3 million budget. Spokesman Burke Brennan said the remaining money will be “revenues raised from fees derived from the initiatives in (the Authority’s) work program.”

Decaturish.com had some detailed questions based on a copy of the intergovernmental agreement it received. The Development Authority will have an $80,000 travel and entertainment budget. Decaturish wanted to know what kinds of travel and entertainment would be permissible. There’s a $79,000 line item for rent and utilities. Decaturish wanted to know why the Development Authority has to rent space instead of using space provided by the county.

Brennan said there would be accountability for the Development Authority’s activities.

The biggest budgeted expense is the $820,000 set aside for Development Authority Staff. There will be 12 paid positions.

Here are the salaries for those positions:

Director of marketing and communication – $75,000

Director of business development and recruitment – $75,000

Manager of small business and entrepreneurship – $55,000

Manager of business retention and expansion – $55,000