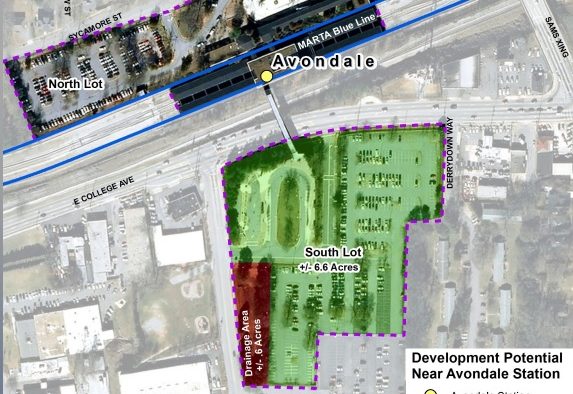 This image comes from the profile of the Avondale MARTA station on the Itsmarta.com website. It shows the area that will be turned into a transit oriented development.
Share 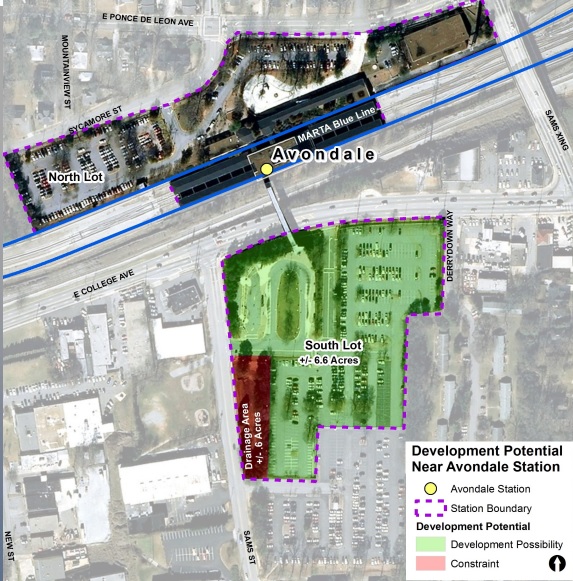 This image comes from the profile of the Avondale MARTA station found on Itsmarta.com. It shows the area that will be turned into a transit oriented development.

MARTA’s board of directors has unanimously agreed to begin negotiations with the Decatur Development Authority to revitalize the area around the Avondale  station.

The board authorized the negotiations on March 6.

Under the terms of the arrangement, the developer will transform the 6.6 acre parking lot south of the station into a mixed-use, transit-oriented development.

The plans call for 604 apartment units, 74 condos and 25,000 square feet of retail, and the project will be completed in phases, according to Amanda Rhein, senior director of transit oriented development for MARTA.

Rhein said the transit agency will maintain ownership of the property and will enter into a 99-year ground lease with the DDA.  Work could begin as early as next summer. Rhein said Columbia Ventures is applying for tax credits that will ensure that 20 percent of the units will be affordable housing.

“They would be prepared to begin construction prior to the award being announced, because they’re confident they’ll be selected,” Rhein said.

So if MARTA owns the property, why would the transit agency need to enter into an agreement with Decatur?

“We’re able to leverage their unique skill set in this process to move through it more efficiently,” Rhein said. “When you have the city as a partner, it ensures that the permitting process is more efficient so that reduces some of the risk for the developers.”

Rhein said the next steps will be negotiating a term sheet that will become part of a master agreement.

“Once that’s signed, the developer will begin the due diligence process, which will include getting financing,” she said.

MARTA developments are notorious for taking a long time to come to fruition. Rhein said in addition to the Avondale project, MARTA is also moving forward with a Transit Oriented Development around the King Memorial Station.

“So we’re seeing significant movement on those two stations,” she said. “We’re very focused on this.”