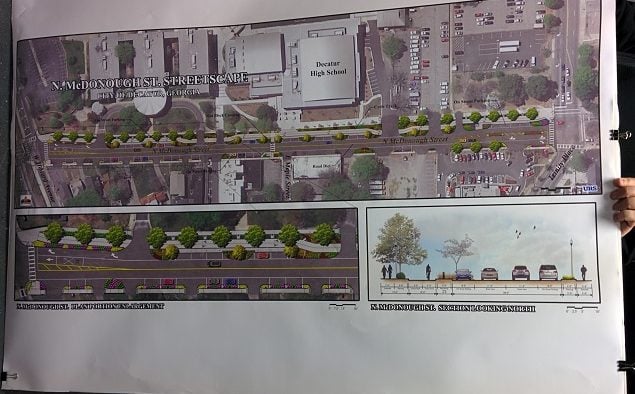 This rendering of the McDonough streetscape project was presented to the City Schools of Decatur Board of Education on March 11.
Share 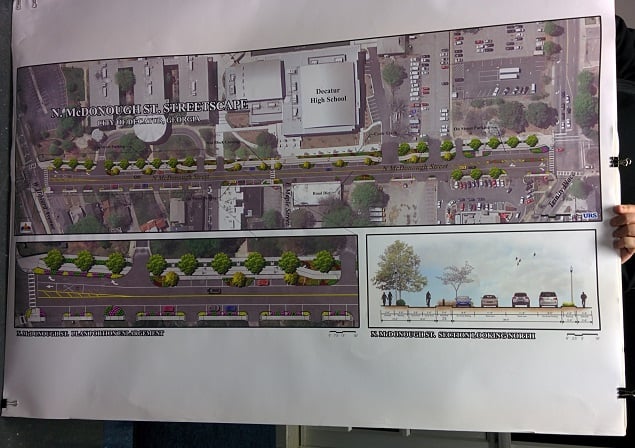 This rendering of the McDonough streetscape project was presented to the City Schools of Decatur Board of Education on March 11.

There’s some overlap in the timelines for Decatur High’s expansion and the $2 million McDonough streetscape project, but CSD apparently didn’t get the memo.

“I hadn’t heard about this until last week,” Superintendent Phyllis Edwards said.

Deputy City Manager Hugh Saxon spoke at the March 11 Board of Education meeting, where the school board approved the city’s request for an easement on the southeast corner of the high school’s campus. He said discussions about the streetscape project began in 2010.

Saxon told Decaturish that with so much time between planning the project and construction, school officials may have forgotten about it. He said 80 percent of the funding will come from a federal grant.

“Planning for these projects is extensive and takes much longer than if the funding was entirely local,” he said. “I wouldn’t be surprised if there has been significant turnover at the City Schools, as well as throughout the Decatur community, since the planning began almost four years ago.”

The streetscape project will begin in June of 2015 and will last for 12 months. The city will shrink the road from four lanes to two in order to make it friendlier for bicyclists and pedestrians.

In addition to the easement, the city of Decatur would also need to put trailers in the school system’s upper parking lot during construction.

School board members looked caught-off guard during the meeting and asked about the short-term and long-term implications of the city’s plans.

School Board Member Annie Caiola said she wanted to know more about what effect shrinking McDonough would have on traffic going to and from the school.

She said the school system can, “work through the short term inconveniences. I’m more concerned about what is the long term impact.”

Saxon said the city would work to make the process as painless as possible.

“The City and City Schools’ practice is to coordinate construction projects to make sure that communication is effective and that impacts are minimized,” Saxon said. “In this case, we will be working with the school staff and architects to make sure the streetscape improvements complement the proposed changes to the Decatur High School campus. Once construction is underway, the City’s streetscape contractor will also be required to maintain access and a safe environment for students traveling to and from DHS and for other pedestrians and motorists who are moving through the construction zone.”