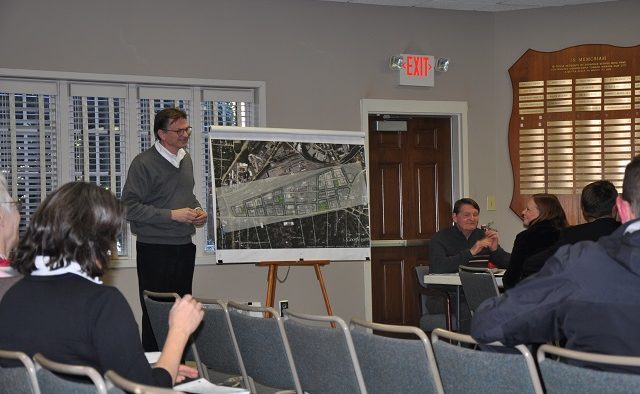 March 13, 2014: John Threadgill talks to Avondale Estates City Commissioners about his ideas to improve upon suggested revisions to the city's master plan.
Share 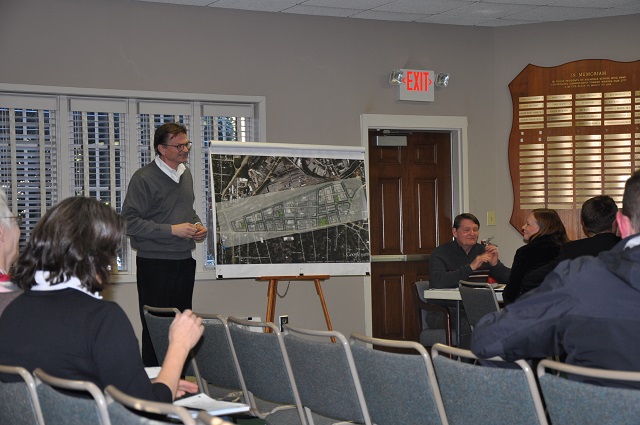 March 13, 2014: John Threadgill talks to Avondale Estates City Commissioners about his ideas to improve upon suggested revisions to the city’s master plan.

The update to Avondale Estates’ Downtown Master Plan is all but finished.

Not everyone is happy with it, but critics think the plan has potential. City Commissioners will likely approve the plan this month, to meet deadlines set by the Atlanta Regional Commission. Having the plan in place will give the city an opportunity for grants that will provide money to redevelop the city’s downtown.

City Commissioners held another work session on March 13 to allow for more time for public input. Residents John Threadgill and David Sacks brought a transparency to place on top of the map that was developed by Pond and Company, the city’s consultant.

“The district’s big enough that there’s kind of distinct sub-neighborhoods in it,” Sacks said. “They each deserve to have a significant green space that’s kind of a community anchor.”

At the end of the meeting, city commissioners agreed to include the map overlay as an addendum to the larger planning document.

Mayor Ed Rieker said the plan is not going to be chiseled in stone. He said the plan and the city will need to be flexible to attract developers.

“Because we’ve put something in this plan, it doesn’t mean it’s done, because what we don’t know is who’s going to pay for this stuff,” Rieker said. “We’ve got to make sure we’re moving forward in a way that doesn’t mess up the back half of this thing.”

The city paid for the update with a $64,000 grant from the ARC. The draft document divides the city into six distinct districts: :Tudor Village, Mill District, Northern Gateway, the Rail Arts District, Northside Avondale and the Western Gateway. The consultant identified $28 million in potential transportation improvements for the city. To read the full draft, click here.

Threadgill and Sacks said while the plan isn’t everything they’d like to see, it’s something they can work with.

“One thing that’s really important to keep in mind about the plan is it is a flexible plan,” Sacks said. “I don’t think they ought to go around and around and around to fine tune it and get it perfect. I do think it’s important that the overall vision really reflects Avondale and the unique character that Avondale has.”

Lisa Shortell, who has attended most of the input sessions, called it a “great start” but said it still needs work.

The consultant said the plan’s recommendations could create 919 new housing units, with 107 detached single family residences or townhomes. The rest would be rental or for sale multifamily housing. It could also add 166,350 square feet of retail and 55,500 square feet of office space.

Bill Clark, another resident, said it’s a good plan on the verge of being a great one. He said commissioners should continue talking with residents as they move forward with it, making sure to include their input. That said, he predicts the business community will be pleased with it.

“I think the plan that we saw today is going to be very attractive to developers,” he said. “I’ve already showed it to people in the developer community and their comments are very positive.”

Before she left City Hall, Shortell made a point of telling Decaturish that she wants the city to keep making progress.

“None of this is meant to slow the process down,” she said. “Everybody is excited about development and we all want it to happen.”