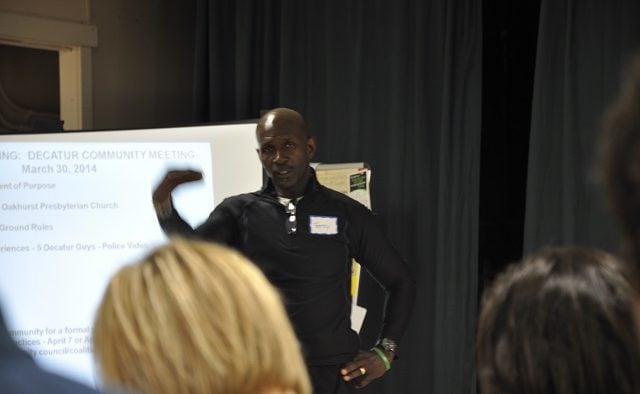 Terry LeCount, a former NFL wide receiver and paraprofessional at Oakhurst Elementary, tells his story about being stopped by Decatur Police. LeCount and other residents gathered on March 30 to discuss how to deal with perceived racial profiling by police officers. Photo by Dan Whisenhunt
Share 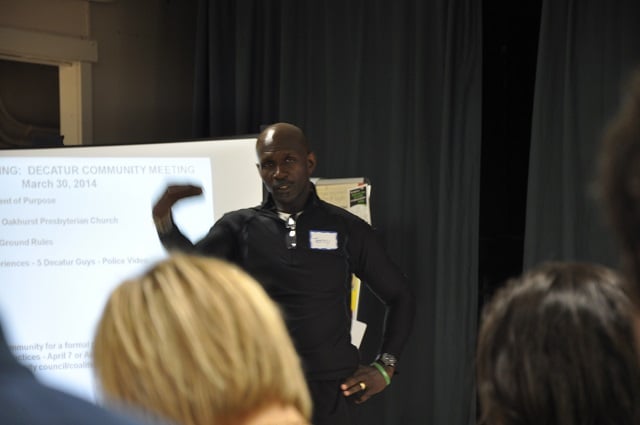 Terry LeCount, a former NFL wide receiver and paraprofessional at Oakhurst Elementary, tells his story about being stopped by Decatur Police. LeCount and other residents gathered on March 30 to discuss how to deal with perceived racial profiling by police officers.

The stories were filled with disbelief, sarcasm, anger and – sometimes – dry humor.

Black men stood in front of a room of about 70 people at Oakhurst Presbyterian Church on March 30 and described how it felt after they were stopped by Decatur Police. The men all said they were stopped because either police officers or a resident had racially profiled them.

Rex Kaney, a white retired United Methodist minister, mediated the meeting. Decatur Police officers were not invited and did not attend in any official capacity.  The meeting included whites and blacks, some of whom were members of Oakhurst Presbyterian.

One man who spoke, Don Denard, is former city school board member. Another man, Terry LeCount, is a former NFL wide receiver who works as a paraprofessional at Oakhurst Elementary.

Denard’s story of being stopped by police while walking down his street in December was the trigger point for the meeting. He said police are trying to show residents that they are working to combat crime in the community, which is leading to more uncomfortable encounters between black men and police.

He showed dashboard camera video from his encounter with police on South Candler Street. Three police cars stopped to talk to him after an officer thought he looked suspicious after she saw him walking down his driveway. An internal police department investigation determined that there was no racial profiling involved in the situation. On the video, a black Decatur police officer is seen shaking his head in disbelief as he’s walking back toward the police car.

LeCount said he was stopped by an officer while walking near Agnes Scott who told him he “fit the description of somebody.” In addition to LeCount working at Oakhurst Elementary and being a former professional football player, he was also named a Decatur Hometown Hero in 2010 for his work with kids in Decatur.

LeCount assumed most people know who he is.

“I would think since I’ve been here for so long, most people if you see me, you would know me,” he said. “They know me for the things that I do. I work with kindergarteners. Most people know me as the guy that works with the little bitty kids.”

Thaddeus Nathaniel, whose wife is white and from Decatur, said he was stopped twice: once after a resident called the police because they thought he looked “lost,” and once by a Decatur Police officer. The officer told him there was a law against soliciting and asked him for his identification. Nathaniel said he would not show his ID, because he had done nothing wrong. He said he was headed downtown to distribute surveys for his job.

Eventually, police were able to verify Nathaniel’s identity and let him go.

Meredith Gordon said he was walking down the street early one morning in Winnona Park where he lived. A neighbor saw his silver coffee mug and thought it was a gun.

“I was drinking coffee that morning,” Gordon said. “I was listening to my iPod and having a nice walk. I was thinking I live in a really cool neighborhood.”

He was stopped by a police officer. Then another police car arrived. Gordon said he thinks his age put officers at ease.

“They saw me as a middle aged guy,” Gordon said. “They quickly, they kind of chill, and we paused for a moment of awkward silence. I said, ‘Well, what happens next?’ He said, ‘Well, nothing.'”

Gordon said for a minute he began to doubt that it even happened, until he filed a records request and confirmed it himself.

“The person that called the police on me – I don’t know what their deal is,” he said. “I don’t know if something happened to them, or they’re flat out racist … It was very strange, particularly because my wife and I moved to this community in large part because of this church and the community itself.”

Another man who identified himself only as Joel said he was stopped by police while walking down Church Street at 1 am.

Joel said at one point he asked a Decatur official if there were two sets of laws in the city: one for white people and one for black people.

Decatur’s gentrification process has brought a new wave of affluent, white residents to looking to live in a good school district. There has also been a heightened awareness of crime in the city. Over the March 29 weekend there were two robberies. Police officers recite the mantra to all residents: If you see something suspicious, you’re supposed to “say something” to police.

Decaturish asked Decatur Police Sgt. Jennifer Ross about this in August. Ross, the police department’s public information officer, said that police want residents to focus on behavior, not skin color. Is there a car backing into your neighbor’s driveway that you don’t recognize? Is there a vehicle that you don’t recognize that keeps circling the block? That is the “something” that police want residents to “say something” about, Ross said.

Decatur Police regularly undergo racial sensitivity training, according to the department. Denard said he doesn’t think the training has helped police officers make sound decisions about who to question and why.

“Apparently that training is not adequate,” he said.

The meeting ended with some of those in attendance agreeing to join a working group to develop a document to present to the City Commission. Denard hopes to create a citizens’ oversight committee to ensure that policing in the city is fair to all residents. One specific solution he suggested was for police officers to gather all data about individuals they stop, including statistics like race and gender.

Editor’s note: An earlier version of this story incorrectly identified one of the speakers in some of the quotes. This story has been updated to reflect the correct information.