This is a MAP of the R.A.D. Studio Cruise, courtesy of R.A.D.
Share 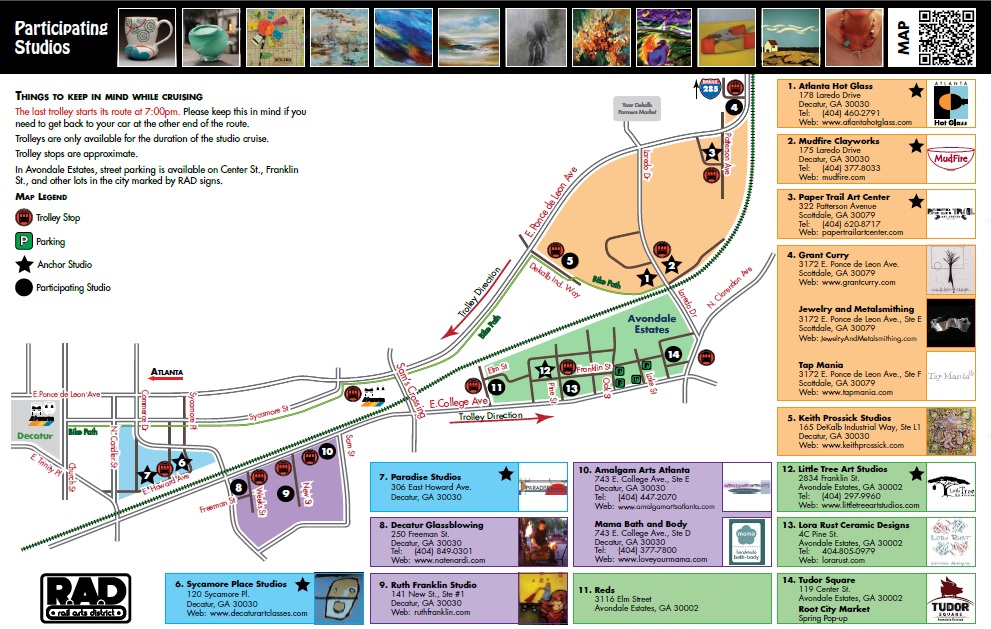 This is a MAP of the RAD Studio Cruise, courtesy of the Rail Arts District. Click to enlarge.

The organizers of the Rail Arts District Studio Cruise have released an updated list of what’s in store for the March 15 event.

The event will be held from 12 pm to 8 pm on March 15. Admission is free. Attendees will get to check out cool art studio spaces along the CSX train corridor connecting Avondale Estates, Decatur and Scottdale.

There will be free trolley service this year connecting attendees to the six studios located along the tour. The Root City Market will be on one of those stops at the Market Events building located at the Tudor Square at 119 Center Street in Avondale Estates. The quarterly Root City Market takes place in locations around Metro Atlanta. There will also be an official unveiling of Tudor Square redevelopment plans, according to RAD.

Avondale Estates Towne Cinema will be open to the public for the first time in several years, according to RAD. The theater was constructed in 1925, but for the last few years it has been vacant and a source of intrigue.

“Several MARTA train and bus stops are in Avondale Estates and Decatur, and parking is available in any of the public parking locations in either city. RAD trolleys offer the option to park once and ride between the RAD venues,” a press release from the RAD says. “The trolley stops will include a stop at the north side Avondale Station.”

The participating art studios this year are: