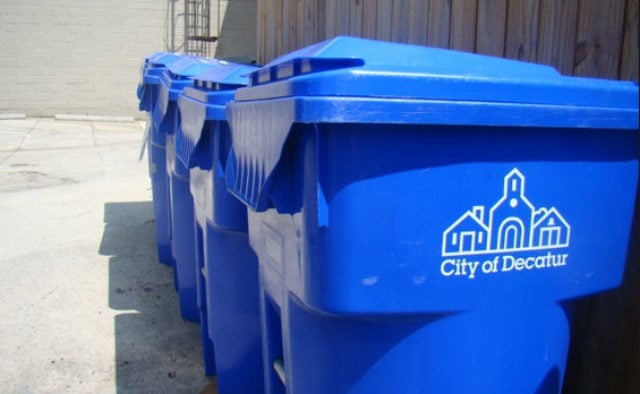 A 95 gallon cart used to collect recycling for the city of Decatur.
Share 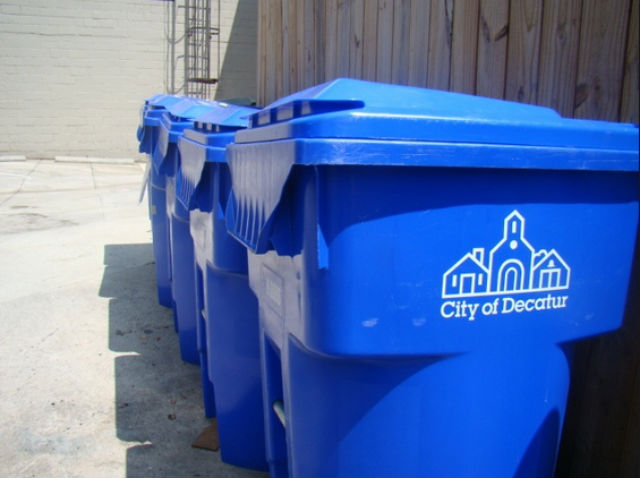 A 95 gallon cart used to collect recycling for the city of Decatur. The city commission is considering several fee increases for trash collection services. Photo from Decaturga.com

Decatur City Commissioners will consider increasing the fees for residential and commercial garbage service at their Monday meeting.

Under the recommended fees, residential services would increase from $235 per unit each year to $237. City staff is recommending an increase in the city’s 95 gallon cart services for businesses. Under the changes, the price would increase from $705 per 95 gallon cart per year for once-a-week service, to $710.  Collection of the three cubic yard dumpsters would go up from $1,060 per year to $1,070.

The price of the special trash bags residents are required to use under the Pay as You Throw program will remain the same. In a memo attached to the agenda item, Assistant City Manager David Junger gives a couple of reasons for the recommended fee increases.

“As of June 30, 2013, the Solid Waste Fund operations showed negative retained earnings for the year of approximately $9,555, which increased the total negative fund assets to $39,729,” Junger wrote. “During 2013-2014, our expenditures were approximately $10,000 more than budget, primarily because of higher than anticipated costs for staff overtime to cover all of the spring neighborhood cleanup events, and the ever-popular electronics recycling, and document shredding events.”

Junger noted that fees for trash collection have tended to go up on a regular basis. In Fiscal year 2010, the cost for residential service was $225 per unit. It increased to $228 per unit in Fiscal Year 2011, then went up to $233 for two years and was raised to $235 just last year.

City records show the same is true of the annual fee for commercial dumpsters. In the Fiscal Year 2011 budget, the annual assessment on dumpsters was $950.

Junger wrote, “These increases are in part due to a general inefficiency in the labor intensive collection process for both the 95 gallon cart and the 3 cubic yard containers as well as the overall increase in commodities purchased to operate the solid waste enterprise.”

Junger concluded his letter to the city commission by writing, “It is anticipated there will be sufficient revenues to cover operating costs in the current year. However, the estimated revenues from the proposed fees does not provide much of a margin if economic and market conditions change beyond what has already been anticipated.”

The March 17 meeting begins with a 6:45 pm work session on the creation of a Unified Development Ordinance, the city’s rewrite of its zoning codes. The regular meeting begins at 7:30 pm. Meetings are open to the public and are held at City Hall, located at 509 North McDonough Street in Decatur.